The Club’s legendary Pomeroy Memorial Trophy will once again open the Race and Speed Season in 2016, taking place on Saturday 20 February at Silverstone. Late entries are available so if you would still like to take part in this legendary ‘must-do’ VSCC event, please contact the Competition Department now!
The concept was first mooted by John Rowley in 1947, but because of petrol rationing it did not actually take place until 22 March 1952. It was won by Peter Binns in a Vauxhall 30/98. Although not Laurence Pomeroy's idea, it was his formula to calculate the efficiency of GP car engines that was used as the basis for the calculations and he presented the Trophy. An interesting aside is that until the event could take place, the Trophy was awarded for 'Outstanding Service to the Club' and was first won by Cecil 'Sam' Clutton in 1948.

The ‘Pom’, as it is affectionately known in VSCC circles, is a truly unique event within the motorsport world, in which the speed, agility and braking ability of Pre-war and Post-war machines are pitted against each other. Over the course of the day, Competitors will take part in handling, acceleration and braking tests, followed by a High Speed Regularity Time Trial, not forgetting a test to make sure their car can carry two ‘standard’ VSCC size suitcases!

In addition to the circuit based tests, all cars are required to be road legal (although there is no planned Filter Point for Competitors to pass through en route to the circuit this year) and can be either driven or trailered to the event, with those Competitors choosing to use a trailer receiving a penalty to maintain and encourage the long-standing traditions of the ‘Pom’. The car which wins the ‘Pom’ is always a true all-rounder driven by a great driver, so why not join us and see how you and your favourite car fair?

NEW FOR 2016! In a bid to further boost the great reputation of this most famous event, this year we look to open the event up to more Club Members, with the opportunity of those Competitors of smaller capacity Pre-war cars to take part, and contest a new Voiturette Trophy.

The event comprises one class and is open to road equipped cars of any age, including tax, MOT (if required for age of car), road legal tyres, exhaust, lights etc, with a capacity of greater than 1949cc (or 1495cc if super-/turbocharged) for Post-war cars and no capacity restrictions for Pre-war cars.

Although not strictly a Race, all Competitors must hold a 2016 MSA Race Licence (minimum National B) or FIA ASN equivalent as the afternoon’s regularity sessions are run under race conditions and all entrants must be members of the VSCC.

As many competitors will be aware, regulation changes at the MSA have inadvertently affected the personal equipment requirements for competitors in Post-1977 cars at The Pomeroy Trophy, specifically in relation to Frontal Head Restraints and the associated harness requirements.

We are delighted to announce, that following feedback from Club Members, Dave Salmon, Chief Executive, has undertaken extensive negotiations with the MSA regarding this issue and the requirement for FHRs has been waivered for The Pomeroy Trophy.

This waiver will now allow Competitors in road-going post-1977 cars to enter The Pomeroy Trophy without requiring FHRs or harnesses. However, they will still be accepted should competitors choose to use these items.

Members can now download Supplementary Regulations and Entry Form or enter online from the event page (CLICK HERE). Please note that the car will need to hold an Eligibility Buff Form and you will need a current payment card register with the Club to use the online facility – if you are entering a Post-war car or a Pre-war car that does not hold a Buff Form, please print an Entry Form to complete and return to the VSCC Office (fax/email accepted).

If you have any questions about this or any VSCC event, please contact the Competition Department on 01608 644777 Ext 4 or email comps@vscc.co.uk 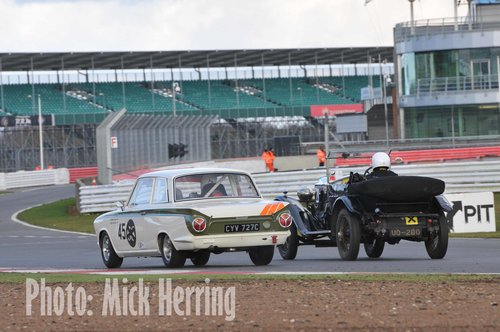