It’s one of those great pub debates: ‘Which is the world’s greatest car building nation?’ Thankfully it’s a long-running conundrum visitors to the forthcoming London Classic Car Show (18-21 February) will settle once and for all.
• Will French flair conquer Japanese innovation?
• Vorsprung durch Technik vs British Racing Green
• Superfast Italian supercars or mighty American muscle cars?
• The Classic Six Nations Cup will provide the definitive answer

To put an end to all the interminable arguments, a special contest is being staged on the event’s central Grand Avenue – an indoor runway stretching the full length of the show at ExCeL where many of the world’s finest cars are fired up and driven.

Ten truly iconic and evocative cars have been selected to represent each of the American, British, French, German, Italian and Japanese automotive industries. These flag-wavers will then battle it out for ultimate Classic Six Nations Cup glory.

The teams will first be in action for a glittering Opening Ceremony during Thursday evening’s star-studded opening night Preview, after which there will be a very special public debate. Six respected classic car experts will put forward the case for each of the six countries represented on The Grand Avenue. Already confirmed are two well known motoring journalists and television presenters: Tom Ford and Jonny Smith.

Head-to-head heats then will follow on Friday and Saturday with show-goers voting for their favourite nation. After all those votes are counted, Sunday will stage fifth and third place play-offs before the afternoon’s Classic Six Nations Cup Grand Final. The winner of that concluding match will be crowned as the world’s greatest car building country, thus settling all the arguments.

“It’s going to be a truly fascinating match-up,” agrees Bas Bungish, Event Director. “We have hand-picked some wonderful cars to represent the six nations including amazing Ferraris, Lamborghinis, Bentleys, Bugattis, Delahayes and Porsches as well as some less glamourous, but perhaps more significant, cars such as the VW Golf GTI, Mini Cooper S, Citroen 2CV and original Fiat 500. I’m now really intrigued to discover which country will come out on top. Will Vorsprung durch Technik overcome British Racing Green? Will French flair triumph over Japanese innovation? Will Italian prancing horses outrun American muscle? Luckily, we haven’t got long to find out.”

The Classic Six Nations Cup on The Grand Avenue is just one of the many highlights at the London Classic Car Show – a must-attend event for any motoring enthusiast, classic car owner or collector. Exhibitors include pedigree manufacturers, top dealers, passionate car clubs and notable automotive accessory outlets, while feature displays will put the spotlight on the incredible McLaren F1 supercar and fearsome Group B rally era.

Show tickets are on sale now and start at £23 (including booking fee) for single adult entry on Friday, Saturday or Sunday and rise to £65 for Premium tickets to Thursday’s opening Preview Evening. Sought-after Premium tickets are available for all four days and include fast track entry, the best views of The Grand Avenue at the Turning Circle Viewing Platform, access to the exclusive Premium Lounge, a Show Handbook and even a glass of Joseph Perrier Champagne.

Full details of these as well as even more affordable Family and Late Entry tickets can be found via the show’s official website – www.thelondonclassiccarshow.co.uk. 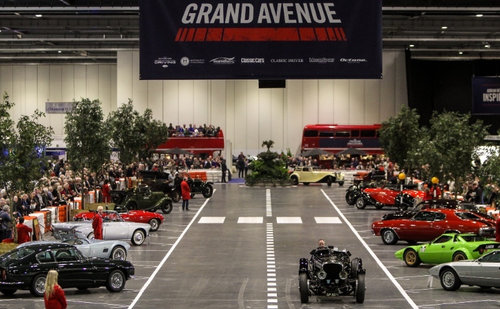