An undoubted highlight of the Club’s annual Events Calendar for over 60 years, the ‘Pom’ remains one of the most unique and enjoyable competitions in the world of motorsport. Be sure to join us at the home of the British Grand Prix for all the action, tomorrow Saturday 20 February.
The only VSCC event open to all Pre- and Post-war cars (to capacity restrictions) takes its traditional February slot at Silverstone – always the first event of the year for the historic venue – for one of our oldest and most unique traditions.

Having passed the morning’s Scrutineering processes, including the famous ‘suitcase’ check –all cars must be able to store two ‘Le Mans’ regulation size suitcases to prove their Grand Touring status – Competitors will face the traditional morning challenges, including Driving Tests of speed and agility before taking to the National Circuit for the afternoon’s forty minute Regularity Trial to complete a designated target number of laps.

Aided by the event’s complex formula, based on Laurence Pomeroy Junior’s calculations of the efficiency of Grand Prix car engines, we will crown the best GT car by day’s end.

The day boasts another eclectic entry, spanning over a century of motoring history, with Luke Roberts’s 1906 Bianchi 28/40 the oldest machine on show. He will compete against a further three Pre-1918 Edwardian cars for the Pomeroy Edwardian Trophy, including former winner and BRDC Secretary, Gillian Carr in the 1915 Stutz Bearcat and last year’s victorious machine, Alisdaire Lockhart’s 1911 Vauxhall Prince Henry, driven this year by David Biggins, whilst Richard Ellingworth will complete the line-up in his Detroit-based 1909 Hupmobile.

As is tradition, the list of participating cars is littered with Frazer Nash racers, so successful has the marque been in recent years, notably winning seven of the last ten events, including overall victory for Martin Hunt’s 1952 Targa Florio last year. Amongst the Pre-war contingent, expect to see regular ‘Pom’ top performer Dudley Sterry take the challenge to the ‘Chain-Gang’ in the HRS Sports.

The Post-war class offers the usual variety of Saloons and Sports-Cars. The BMW badge is well represented as always, with fellow German manufacturer Porsche also a popular choice this year. Those fans of ‘Americana’ will enjoy following the exploits of Julian Balme in his 1954 Lincoln Cosmopolitan Coupe, whilst Charles Clegg and Jason Wright face a fun challenge to complete 34 and 36 laps in the 1962 Chevrolet Corvette and 1965 Ford GT40 respectively in the afternoon’s Regularity sessions.

Morning Tests will commence at 10.00am with a Lunch Break scheduled before the start of the Afternoon track sessions, due to begin at 1.30pm.

This year’s event is free and open to all Members and Non-Members alike, including free Spectator access to the Paddock and the BRDC Grandstand. And don’t forget to wrap up warm!


Take part in ‘Parade Laps’ on the day!

For those of you who are planning to attend, we are delighted to announce Parade Laps will be available during the Lunch Break.

Restricted to a maximum of 25 cars, participants will get to drive 3 laps behind a course car around the iconic Silverstone National Circuit for the small fee of £25 per car.

Registration for the Parade Laps will take place on the first floor of Race Admin between 11.00am and 12.00 Noon, with laps scheduled to start at 12.30pm.

Places will be allocated on a ‘first-come-first-served’ basis with all drivers required to produce a valid Driving License for checking and present all passengers for signing-on. Payment is required on registration by cash or cheque only, payable to the Vintage Sports-Car Club Ltd.

Open to all cars (Pre- and Post-war), however, they are required to be road legal and fully taxed and Mot’d as required by DVLA.

A unique opportunity not to be missed! 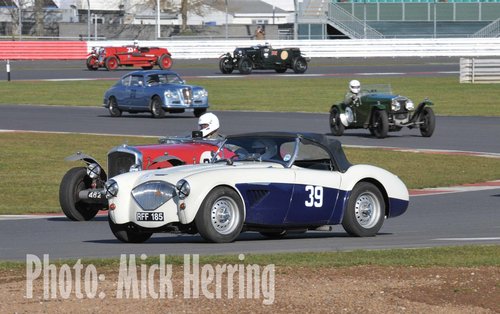