Herefordshire next up for VSCC Triallists this weekend

Following last weekend’s successful John Harris Trial in Derbyshire, VSCC Competitors head to the Wye Valley for the next round of the season, the Herefordshire Trial, based at How Caple Court near Ross-on-Wye this weekend, 12/13 March.
Once again we attract a capacity turnout of 110 Pre-war cars for Clerk of the Course, Mark Garfitt and team’s annual event, which will follow its traditional Saturday lunchtime start through to a mid-afternoon finish on Sunday. Competitors and Marshals alike will gather for the long-established Supper Party on the Saturday night at the Concert Barn, ever the social highlight of the weekend, where the all-important halftime scores will be announced.

The event is also a favourite for Spectators, who again will be most welcome to come and watch the action at some of the sections over the two days. Saturday Hills will be open 12.00-5.30pm whilst Sunday runs 8.45am-2.30pm. Download a copy of the Spectator Information for full details including locations of those Hills open to Spectators and a complete Entry List (CLICK HERE).

The Club’s Trials Season has proved as popular as ever so far this season as we embark on the third round of 2016 this weekend.

It has been a fierce battle thus far at the top of the Short Wheelbase classes, with 2014 Trials Champion, Matt Johnston (Austin 7) and reigning incumbent, David Golightly (Ford Model T) enjoying victories at our Exmoor and Derbyshire events respectively. Expect the pair to be joined by the Austin 7 of Donald Skelton as the perennial challengers lock horns once more this weekend. With a first and second place finish so far this season, and victory at the Herefordshire last year, David Rushton will be a strong favourite amongst the Standard Cars in his MG M Type.

Reigning Long Wheelbase Champion, Paul Jeavons scored an impressive overall victory in his Vauxhall 30-98 at the Exmoor Fringe Trial last month – even getting the better of the traditionally advantaged short wheelbase cars. Having followed this with yet another award at last weekend’s John Harris Trial, he will surely be amongst the frontrunners once more in Herefordshire, alongside Jonathan Miller, winner last week in his Chrysler 66 Sports. The Collings family will be eager to repeat Harriet’s Class victory from last year, however, with three generations represented in the weekend’s entry, including Past President Roger Collings’s 1903 Mercedes 60HP, son Ben’s Bentley 3/4½ Litre, and the similar Bentley machines of grandchildren, Frank and Charlotte.

We wish Mark Garfitt and his team, and all those Competitors, Marshals and other officials taking part another wonderful VSCC weekend. 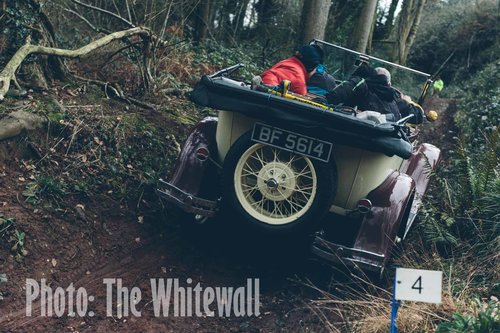