Brewster leads the way at the VSCC Herefordshire Trial

It was another exciting weekend of Pre-war motorsport at the Club’s Herefordshire Trial this past weekend, where Jeremy Brewster claimed the Herefordshire Trophy for overall victory in his 1930 Lea-Francis P Type.
The sun shone bright upon the Wye Valley as the Club’s ever-popular Trials season continued with the annual Herefordshire weekend, serving up another surprise as, for the second time in three events, a car from amongst the long wheelbase cars claimed the top spot. Following a successful outing at the opening round of the season at the Exmoor Fringe Trial, Jeremy Brewster went even better this time, to not only take Class victory amongst the bigger cars but indeed to top score overall against the often advantaged short wheelbase cars.

Winner of the Club’s Frost Trials Championship in 2012, the Worcestershire-based Competitor was a standout performer amongst the long wheelbase classes, well ahead of reigning Class champion, Phil Jeavons in the Vauxhall 30-98 and Richard Edmonds’s Chrysler B-70 Tourer, both 1st Class award winners, with Frank Collings, the pick of the Vintage Bentley contingent on the day, also amongst the silverware. In the all-Ford battle in the Standard cars class, John Dobson triumphed in his 1929 Model A.

Hot on the heels of the leader were several familiar names atop the short wheelbase class, including former Trials champion, Donald Skelton, trailing by a single point in his Austin 7, to claim the Andrew Blakeney-Edwards Trophy and Moffat Mug for his class success. He continued his strong start to the season alongside fellow Austin competitor, Matt Johnston, as the pair distanced themselves in the season standings from reigning champion, David Golightly, who endured a difficult weekend, suffering axle issues with the Ford Model T.

Austins dominated the top places in class, including regulars Richard Houlgate, Simon Blakeney-Edwards and Andrew Fox, all 1st Class award winners in their respective machinery alongside Emma Wall’s 1934 Special, the top lady performer of the weekend, ahead of Alex Milne-Taylor, leading the rest of the pack in her AJS Sports.

There was cause for celebration for renowned Pre-war MG expert, Andy King amongst the Standard cars class, where he enjoyed an award-winning debut in the 1935 MG PB, one of the three famed Abingdon-built MG Works Trials ‘Cream-Cracker’ team cars, following its recent acquisition. He finished runner-up to fellow MG pilot, David Rushton, scoring his second Class victory of the season in his M Type.

The Club would like to thank Clerk of the Course, Mark Garfitt and his organising team for yet another outstanding Trials event, ably supported by Club Secretary Dave Salmon and Richard Prunier, enjoying his first outing as the Club’s new Non-Speed Events Secretary. We also thank all the landowners, event sponsors Bedford Dials and Roger and Vanessa Lee for again allowing us use of the wonderful How Caple Court as our traditional headquarters for the weekend.

Members can now download Provisional Results and view the photo gallery from the weekend at the Herefordshire Trial event page (CLICK HERE). 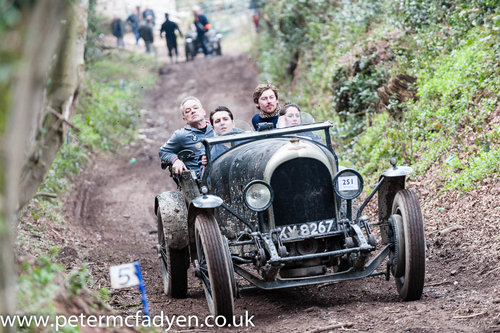