The Vintage Sports-Car Club is proud to introduce the ‘Stanley Mann Cup’ as part of the upcoming ‘Spring Start’ Race Meeting at Silverstone on Saturday 23 April, in honour of the highly-regarded Vintage Bentley specialist and long-time Club Member, who sadly passed away last month.
The event will form part of the Club’s illustrious GP Itala Trophy Race for Pre-1931 Vintage Racing Cars, first competed for in 1947, with a specific class open to any Pre-1931 Bentley car accepted by the VSCC, Bentley Drivers’ Club or Benjafield’s Racing Club – the latter co-founded by Stanley in 1990 in tradition of the celebrated ‘Bentley Boys’ of the 1920s.

Having joined the ranks of the Vintage Sports-Car Club in 1975, Stanley was a regular and successful Competitor across the Club’s racing and speed events, inevitably in a variety of Vintage Bentley machinery, whilst also taking part in Trials events in his 1929 Ford Model A in recent years.

Moreover, Stanley was considered one of the world’s leading experts on Vintage Bentleys via his highly successful Stanley Mann Racing business, and was widely regarded for championing the use of W.O. Bentleys in Historic motorsport during the modern era. He was well known for his "drive it there, race it round and drive it home" approach to competing.

Former Chairman and co-founder of the Benjafield’s Racing Club and fellow VSCC Club Member, Philip Strickland says, “Stanley was a market maker and proud promoter of the remarkable Vintage Bentley. His philosophy was simple – the Vintage Bentley can do everything and we should never miss a chance to prove it! Whether racing with the VSCC, rallying or speeding across Russia, USA or the Continent, if Stanley was not there at the front with his Bentley, it probably was not worth attempting.

“His generous spirit will live on in this celebration of his contribution to Vintage motorsport and I hope we have a huge turnout for the Stanley Mann Cup. Benjafield’s Racing Club, as well as the family, is honoured to see such an accolade to their lifetime President.”

The Club looks forward to welcoming all Bentley owners and enthusiasts to Silverstone in April for the long-established season opener for Vintage and Historic Racing in the UK, with over 200 historic racing machines gathering for the 11-Race programme at the spiritual home of British motorsport, as we remember one of Pre-war motorsports most eminent supporters.

Entries are now open for our Silverstone ‘Spring Start’ Race Meeting. CLICK HERE to visit the event page, where you can see the full Race Programme and download Supplementary Regulations and Entry Forms; Club Members can also enter online  (remember you will need to know the Buff Form number of the car you wish to enter and have a current payment card registered with the Club to use the online entry facility).

To request hard-copy of Regulations and Entry Forms, or if you have any questions about this or any VSCC event, please contact the Competition Department on 01608 644777 Ext 4 or email comps@vscc.co.uk 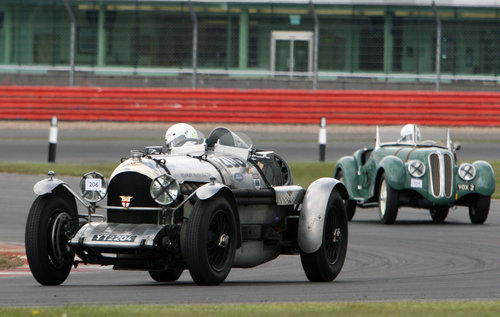