The first half of the VSCC Trials Season concludes this weekend as Competitors head for the familiar surroundings of Lanarkshire for our annual Scottish Trial tomorrow, Saturday 9 April.
Based primarily again on the McCosh Estate at Culter Allers and the stunning landscape in and around the town of Biggar, the event is undoubtedly worth the journey north for one of only two competitive VSCC events in Scotland this year, with its challenging sections and breath-taking scenery – our annual Scottish AutoSolo being the other, later in the year on Saturday 15 October.

Long-time Clerk of the Course, Jock Mackinnon and team have found a winning formula, combining challenge and entertainment whilst maintaining the welcoming relaxed atmosphere the Scottish Trial is famed for. Jock is again joined by Club marshalling stalwart, Martin Jelley, who continues as Chief Marshal and will no doubt bring a team of supporters with him from his Lancashire base.

The Trial is also a favourite for Spectators, particularly amongst those more local who otherwise have to travel some distance to witness a VSCC event. They again will be most welcome to come and watch the action. Morning Hills will be open 9.15am-12.30pm with Afternoon Hills 2.00pm-4.30pm. Download a copy of the Spectator Information for full details, including locations of those Hills open to Spectators and a complete Entry List (CLICK HERE).

This year’s Trials season has thrown up some surprising results thus far, including at the most recent round, where for the second time in three events, a car from the long wheelbase classes claimed the top spot ahead of the often advantaged short wheelbase cars. Following reigning Class champion, Phil Jeavons’s success at the opening round of the season at the Exmoor Fringe Trial in his Vauxhall 30-98, Jeremy Brewster took victory in Herefordshire in his Lea-Francis P Type. Neither are entered this weekend, but perhaps another Class regular can keep the streak alive, such as Jonathan Miller’s Chrysler 66 Sports.

Amongst the ultra-competitive short wheelbase classes, former Club Trials champion, Donald Skelton continued his strong start to the season in his Austin 7, to claim class victory in Herefordshire ahead of fellow Austin competitor, Matt Johnston, as the pair distanced themselves in the season standings from reigning champion, David Golightly, who endured a difficult weekend, suffering axle issues with the Ford Model T. The trio will lock horns once more in Scotland and will surely be amongst the front-runners.

Amongst the Standard cars taking part, only mechanical gremlins stand in the way of John Dobson’s Ford Model A as the only long wheelbase car, whilst there is sure to be a fierce battle amongst the short wheelbase class, including David Rushton’s MG M Type, twice a winner this year already, and Charles Gillett, always competitive in his Bugatti Brescia.

The Club would like to wish all those taking part, Competitors, Organisers and Marshals another safe and enjoyable weekend of Vintage motoring. 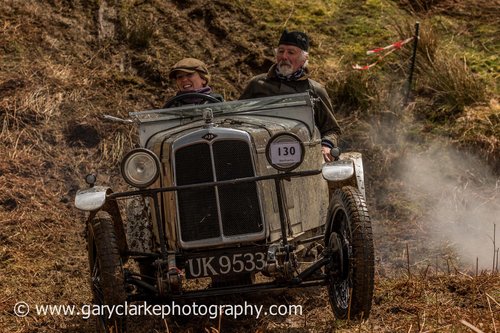