Advance Ticket Sales for Silverstone 'Spring Start' are now closed. Tickets will be available to purchase on the day at £10 per person (Children Under 16 go free!)
This year’s edition of the long-established season opener for Vintage and Historic Racing in the UK is expected to be a record breaker, as we look forward to hosting over 300 historic racing machines, with capacity grids for much of our 11-Race programme at the spiritual home of British motorsport.

The one-day format will continue for 2016, which will include our traditional VSCC ‘sets’ in the form of our illustrious GP Itala Trophy Races, catering for the Club’s core Competitors of Vintage, PVT and Historic Racing and Sports-Cars.

The GP Itala Trophies feature a number of the Club’s most prominent silverware, including the collection’s namesake GP Itala Trophy Race for Pre-1931 Vintage Racing Cars, a part of the VSCC’s first meeting at Silverstone in 1949, which will also feature a special Bentley class for the Stanley Mann Cup; the Club will welcome HRH Prince Michael of Kent, a familiar face at the venue as a member of the resident British Racing Drivers’ Club, who will present the awards for this special event.

The Amschel Rothschild and Patrick Lindsay Memorial Trophies Race for Pre-1961 Racing Cars will again bring together the pinnacle of Grand Prix, Formula 2 and Voiturette racing machinery of the immediate Pre- and Post-war eras, whilst the Fox & Nicholl and Silverstone Trophy Races accommodate both original and more modified road-going Pre-war Sports-Cars.

As ever, Pre-war fans will also enjoy the most eclectic full grids competing in the ever-popular All-Comers Pre-war Short Scratch and Handicap formats.

The VSCC 2016 Race Season will also see a host of Invited grids as part of each race day, with a number of celebrated Clubs and Series scheduled to take part; this year’s ‘Spring Start’ is no exception as we welcome prestigious HGPCA Pre-1966 Grand Prix Cars, the AR Motorsport Morgan Challenge, and the FISCAR Tom Cole Trophy, celebrating the career of the 1950’s Allard and Ferrari driver, who suffered a fatal accident at Le Mans in 1953 in his Ferrari 340 MM Spyder.

We are also delighted to host a very special race Frazer Nash Race, which will see a capacity grid of both Pre- and Post-war cars from the popular British marque whilst the day is further complemented by an ever-popular grid of 1950s Sports and Sports Racing cars.

Aside from the action on track, ‘Spring Start’ will again offer the Spectator all that is great about attending a VSCC Race Meeting, with free access to the Competitor Paddock, where you can get up-close to the cars and drivers, grandstand access, a mouth-watering display from world-renowned auction house and Club Principal Associates Bonhams, onsite catering facilities and a busy Trade Village.

With ‘Spring Start’ coinciding with both the Queen’s 90th Birthday and St George's Day this year, the circuit will be leading the celebrations with a special Afternoon Tea.

Further enhancing the nostalgic festival atmosphere of this year’s event, there will also be a dedicated Food Village located on the inside of Copse Corner, featuring Vintage Bar, Fish and Chips, Coffee and Donuts, and Ice Cream. There will also be a Children’s Entertainment area to keep our younger enthusiasts occupied, including a Bouncy Castle and Face-Painting.

The Paddock Diner will be open all day from 7.30-19.30, offering the usual fare of hot/cold food & drinks (please note that the Paddock Bar will be closed for refurbishment). Download menus for the day via the links below:

Yet another attraction will be Club’s first ever AutoSolo at Silverstone. Taking place on one of the venue’s tarmac car parks, this simple ‘Driving Tests’ competition for Pre-war cars will provide plenty of entertainment during the morning’s Practice Sessions, finishing ahead of the scheduled lunch break before the Racing action begins.

Gates will open at 8.00am, with Practice getting underway at 9.00am and Racing commencing after the Lunch Break at 1.00pm.

Tickets will be available on the gate, priced at £10 per person for both Members and Non-Members. 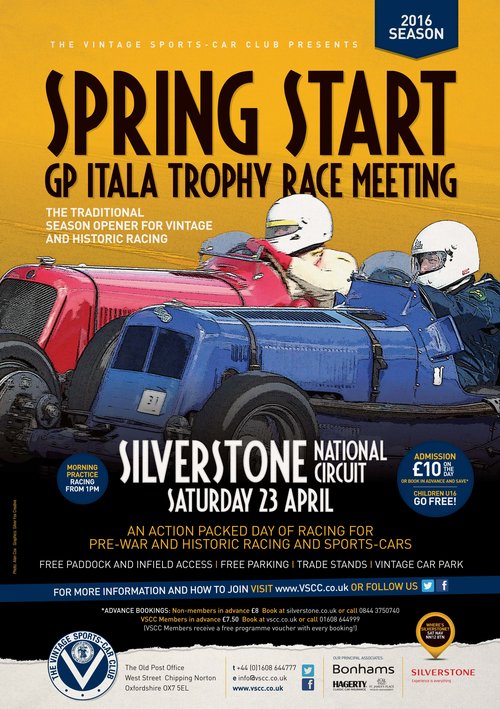