VSCC Rallyists Return to Surrey for the Spring Rally this weekend

The first daytime event of the VSCC Rally Season, the Spring Rally, will take place tomorrow Saturday 16 April, with headquarters based once again in Churt, Surrey.
Following the great success of last year’s event, the Rally returns to the Hampshire-Sussex-Surrey triangle, where the day will again be based from Club Members, Tanya and Robert Lewis’s home in Churt, Surrey who have kindly agreed to continue to host the event. Club Director, Dick Patten and his wife Kimberley along with James Campbell will again lead the organising team, with another loyal band of volunteers and marshals recruited for the day.

The route will be approximately 95 miles in length and will incorporate a welcome halfway Lunch Break.

A fantastic turnout of almost 50 crews will take part in their Pre-war cars, with an eclectic entry of both seasoned veterans and navigation novices involved.

Reigning Club Navigator Champion, Annabel Jones has already enjoyed success this year, guiding William Ainscough to victory in January’s overnight Measham Rally in his Frazer Nash/BMW 319 Saloon. The Frazer Nash Club Captain will be eager to continue her winning ways as this time she accompanies Sir Clive Martin in his 1926 Anzani, alongside other ‘Chain Gang’ contenders, including Mark Garfitt and Robert Ellis in the former’s all-action Frazer Nash/BMW 319/55 Sports and VSCC stalwart Alastair Pugh’s TT Replica, with Louise Bunting in the navigator seat.

There will be plenty of crews looking to prevent the marque’s domination, however, with a host of other Pre-war manufacturers represented, including Lea-Francis, who put forward a strong team; LeaF Owners’ Club Chairman, Sarah Poynter navigates alongside husband Colin in their Ulster example, whilst the very experienced pairing of Allan Lupton and David Kirkham compete in their 12.9 Sports.

A warm welcome too to the 25 teams in our Novice and Champagne Classes. As with all VSCC Rallies, the day’s Route Instructions will be tailored to the abilities of the all the crews, with the traditional different plotting times depending on experience and different average speeds depending on your car’s performance; we hope these less experienced Competitors enjoy their day and are encouraged to come back for more later in the season.

We would like to wish all Competitors, Marshals and Officials the best of luck for the Rally and hope they have another enjoyable day with the VSCC. 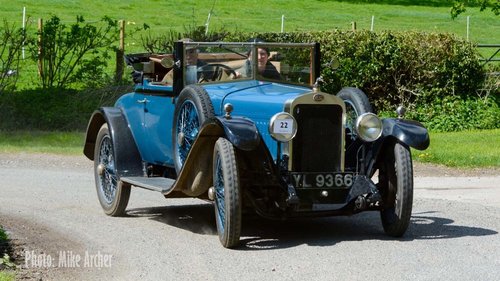