BIG CAT ROARS AT BONHAMS MONACO SALE AS THE HAMMER FALLS AT €7.2 MILLION FOR THE JAGUAR C-TYPE

“Following months of painstaking research, working with the best historians and notable marque specialists, Bonhams unravelled an intriguing mystery involving the unrestored Jaguar C-Type offered, correcting more than 60 years of accepted Jaguar history. Today after 53 years in private ownership, it has sold for the superb price of €7,245,000 (£5,715,580). It is wonderful to see our team’s groundbreaking work help achieve such a result.”

Bonhams’ verification began with the accepted Jaguar belief that this was the works team car which substituted at the last moment as a Belgian Ecurie Francorchamps entry in the 1954 Le Mans 24-Hour Race, combining that chassis with the bodywork from an earlier Belgian entry which finished at Le Mans the previous year. However, Bonhams’ specialist research confirmed otherwise.

“The Jaguar was not at all a combination of the chassis from one car, the body from another,” said James Knight. “On further inspection, we established that it really is the 1953 Belgian-entered Le Mans car in toto, chassis number ‘XKC 047’ – still bearing its original, complete ‘K 1047’ body – but with its chassis number merely re-stamped ‘XKC 011’ by the factory before sale in January 1955.”

A further highlight of the day’s auction was the magnificent, light and powerful straight-8 engined 1925 Bugatti Type 35 Grand Prix Two-Seater, first owned by ‘Bentley Boy’ Glen Kidston. Chassis No '4450' offered was the nineteenth such Grand Prix Bugatti to be manufactured by the Molsheim factory, and boasts a racing heritage that includes notable drivers George Duller, Vivian Selby and Lyndon Duckett. After intense bidding, the Bugatti sold for €1,058,000 (£834,656) to an auction room bidder. 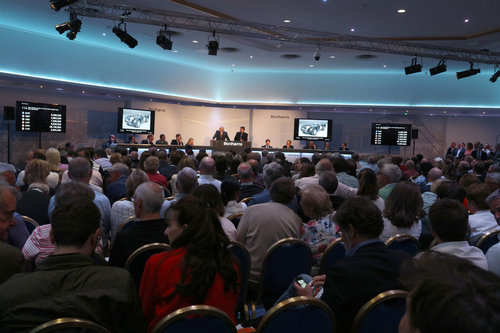