The intrepid racers of the Vintage Sports-Car Club were undeterred by the challenging wet conditions last weekend, as the Club enjoyed another memorable day of Vintage and Historic racing at Oulton Park, where Nick Topliss triumphed in the day’s feature event in his celebrated ERA R4A on Saturday 21 May.
Unable to stay with Dick Skipworth’s dominant sister ERA R3A in the afternoon’s opening Pre-war salvo – expertly piloted again by Mark Gillies – the Bicester-based Topliss gained a semblance  of revenge in the programme’s headline race, combining the prestigious Boulogne Trophy for Pre-1931 Vintage Racing Cars and Hawthorn Memorial & Spanish Trophies for Pre-1961 Racing Cars to form the most stunning grid.

A typically stunning start by the ex-Pat Fairfield and Bob Gerard R4A from the second row of the grid saw Topliss take an early lead before being overhauled by Gillies on lap two. However, the leader succumbed to the mechanical issues that had plagued R3A all day only a couple of laps later, allowing Topliss a free run to the finish to claim the Hawthorn Spanish Trophy, ahead of the battling pairing of the Frazer Nash of Eddie Gibbs and Duncan Ricketts, driving David Baldock’s Alta 2 Litre.

In the same race, Leicestershire racer, Tony Lees evoked the spirit of the great Ron Footitt as he piloted the famed GN-powered AC ‘Cognac’ Special to Boulogne Trophy success as first Vintage finisher in fourth, ahead of fellow ‘Chain Gang’ representative, Charles Gillett’s Frazer Nash Super Sports. With the late withdrawal of Fred Harper’s mighty Monzanapolis Kurtis Indy-Roadster, the way was paved for young Matt Ricketts to take Post-war honours and the Hawthorn Memorial Trophy with a commendable eight place in the 1957 Cooper Type 41.

Elsewhere, it was the Morgan Three Wheelers who bore the brunt of the poor conditions, with their Club Challenge Race opening the afternoon’s programme, with significant patches of standing water around Oulton’s 2.69 mile International Circuit following the lunchtime downpour. Hamish Bibby delivered an expected victory with VSCC Member, Hannah Enticknap in the passenger seat of his JAP-powered racer.

The HRDC were another to provide welcome Invited grids to the day’s proceedings, with Jonathan Lewis scoring an impressive double podium in his Austin Cooper across the two races, firstly chasing home Mark Halstead’s Lotus Elan 26R and the Ford Lotus Cortina of Italian, Augusto Perfetti in the ‘Allstars’ event, followed by race victory in the combined HRDC ‘Academy’ and ‘A-Series Challenge’ race.

Following victory in the equivalent race at Silverstone last month, there was repeat success for Mike Preston as he won the Bill Phillips Trophy Race for Standard & Modified Pre-war Sports-Cars in his stunning Bugatti T35B, pushed close by defending champion, Andrew Mitchell’s HRG and the ever-competitive Sue Darbyshire in her road-going Morgan Three Wheeler.

Amongst the ‘Specials’, Longstone Tyres Chief, Dougal Cawley claimed Oulton Park Trophy spoils in his all-action GN/Ford ‘Piglet’, having enjoyed a race-long battle with the invited ‘Nash of Charles Gillett and Mitchell once more in the HRG.

Up-and-coming teenage star, Peter De La Roche was an impressive winner of the race for F3 (500) Racing Cars, as he led a Cooper 1-2-3 in his Mark 5 example, whilst another ‘young gun’ saw success in the VSCC ranks, with David Seber scoring both a third place finish and race victory in Short Handicap and Novice Short Scratch formats respectively in the Wolseley Hornet Special, as VSCC stalwart and octogenarian, Cyril Hancock, claimed a momentous victory in the former in his Fiat Balilla.

There was further cause for celebration in the Seber household, as father Tony took the win in the day’s other Pre-war Handicap, again in one of the family’s well-campaigned Wolseley Hornet racers.

To bring the day to a fitting and poignant end, Club Members, Competitors and Marshals gathered at the Drivers' Club in the Paddock, where we raised a glass of champagne to remember former Club Secretary, Mike Stripe, who sadly passed away the previous week.

The Club offers its thanks to our MSV and Oulton Park hosts, and all Competitors, Spectators and the impressive turnout of both Club and local Marshals, Officials and other volunteers who ensured another safe and enjoyable day of Historic motorsport.

Full Race Results are now available to download from the Oulton Park event pages of the Club’s website, where you can also view a photo gallery of the event (CLICK HERE). For AutoSolo and Concours Results and photos, follow the links below: 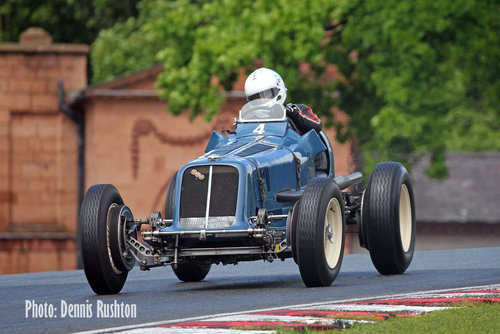