BONHAMS GEARS UP FOR THE FESTIVAL OF SPEED, REVEALING MODELS FROM WORLD’S GREAT MOTORING MARQUES

Magnificent models from Ferrari, Bugatti, BMW and Jaguar are revealed as highlights of Bonhams Festival of Speed Sale, all set to go under the hammer at Goodwood on Friday 24 June.
'Supremely vigorous car with a fiery temperament’

This is how the Ferrari 275 GTB was described when it was first launched. Ferrari built just 48 right-hand versions, with the rare 1966 model offered delivered new to the UK to British racing driver and instructor Mark Konig. Its streamlined nose, tail spoiler and cast-alloy wheels echo the very first developments seen on Ferrari competition cars. It’s truly one of the finest Gran Turismos ever produced by Ferrari. Presenting a superb, swift driving experience, this long nosed variant has been in the same family ownership for more than a decade. It is estimated at £1,600,000-1,900,000.

Elsewhere some eighties muscle with the 1981 BMW M1 Coupé. The M1 coupled Italian style with German engineering, as its development was a cooperative effort with top Italian specialists. The M1's wedge-shaped coachwork proved highly efficient aerodynamically, needing very little in the way of additional spoilers and wings, even in race configuration. It is offered at an estimate of £280,000-320,000

Tim Schofield, Bonhams UK Head of Motoring, said: “The Festival of Speed is the highlight of the UK Summer motoring calendar. Each year Bonhams continue to offer a wealth of exciting, rare, and often record breaking motor cars, and this year is set to be no exception.”

Fitted with the Claude Hill designed 2-litre, 4-cylinder engine, out of the three Aston Martins entered, 'UMC 65' was the only car to finish that year’s Le Mans, placing 7th overall, and 3rd in class. It later ran again as a Works car in the Spa 24-Hour, finishing 5th overall, 3rd in class. Following its works career it then enjoyed further racing success in the hands of various privateers, before entering the ownership of the current custodians in 1965. 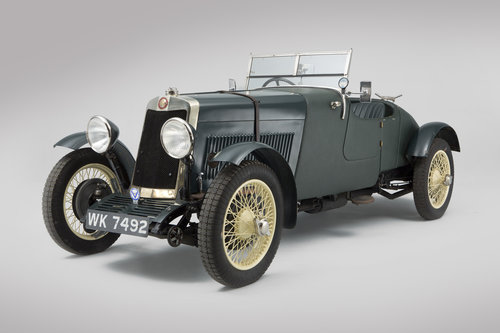