Bonhams is delighted to announce the single-owner collection of entrepreneur and businessman, Robert White, with rare motorcycles, motor cars, watches and cameras to be sold for a charitable cause
The Collection contains a vast treasure trove of collectible mechanical delights worth more than £2 million, including motorcycles, motor cars, Vintage Leica cameras, motoring mascots, Lalique and several rare wristwatches.

Proceeds from the Sale of this incredible collection will be used to build new cancer facilities at Poole and Dorset County Hospitals, benefiting patients across the whole of the country.

“Robert White was a great man and an enthusiast of all things mechanical. The Sale is a showcase of his life’s passion, with more than 500 lots set to raise more than £2 million for charity,” said Malcolm Barber, Bonhams Co-Chairman. “The Collection is the result of a life’s passion for photography – Robert was the founder of one of the UK’s leading photographic retailers – and his adoration for motorcycles. We’re delighted to be able to offer this for sale, and for such a great charitable cause.”

It was his love of motorcycles that first connected Robert White his close friend and confidant, the comedian and TV host, Jay Leno.

“They say that you should never be possessed by your possessions; but Robert took more pleasure from his possessions than any man I have ever met,” said Leno. “The evening ritual of winding his George Daniels watch, for example, was an active delight to him as an opportunity to take pleasure in its mechanism.”

The friends bonded over a love of Brough Superior motorcycles, and before Robert died in 2015, he sold his Brough Superiors to Leno. The funds from the Brough Superiors have been used to support the creation of a brand new cancer treatment centre at Dorset County Hospital and new diagnostic facilities at Poole Hospital, both overseen by the latter’s Dorset Cancer Centre.

Leno said: “We spent time together in England before he died. He didn’t feel sorry for himself or ‘woe-is-me’. He realistically faced up to his position and decided he wanted to give something back to the people in Poole Hospital who had helped him with his illness.”

An astute and dedicated businessman, Robert White’s success enabled him to indulge a passion for collecting machines and objects that embodied the finest design and engineering. He loved to ride motorcycles and drive fast cars. He learned to fly and bought a Vintage Boeing-Stearman bi-plane to travel round Britain.

He was described by a close friend as “A modest person who liked the best of what he liked, but was never one for designer clothes and frippery, leaves a legacy that will outlast all of us. The life of Robert will help countless people he has never met. Robert’s illness taught him what is important, and he was in a self-made position to make a life-changing difference.”

A CHARITABLE CAUSE:
Robert White died of cancer in 2015. His consultant oncologist, Dr. Mike Bayne, said “The impact that Mr. White’s incredible generosity will have to patients facing cancer in Dorset cannot be overstated.

“This lasting legacy will continue to benefit patients and their families for years to come, enabling the people of Dorset to receive the very latest and most effective diagnoses and treatments for a range of cancers, and supporting our skilled clinicians and nursing teams to be among the most advanced in the country.

“Robert White will forever be associated with advances in cancer care in the county, and on behalf of our patients I would like to express our heartfelt thanks.”

The money raised from the Robert White Collection will help to fund essential improvements in cancer diagnosis and treatment in Dorset, including:


MOTORCYCLES:
“Robert White loved his motorcycles, and this is no more evident than when we look at the incredible machines he had in his collection,” said Ben Walker, Bonhams Head of Motorcycles.

“Robert had his own personal motoring museum and workshop where he took great pleasure in showing people his carefully curated items. He was a true enthusiast who appreciated each and every part of these exhilarating machines.

Just 670 4½ Litre Bentleys were built between 1927 and 1931, with this particular model offered carrying the popular Le Mans-style Tourer coachwork, made famous from the Le Mans 24-Hour victory in 1928.

Motor cars featured in the collection include:
WATCHES:
Dr. George Daniels C.B.E (1926–2011) is regarded by many as having been the greatest watchmaker of the last 250 years. In the 1990s, he relinquished some custodianship of his brand to Roger Smith, the man who would continue Daniels’ legacy long after he’d gone.

Smith was the only watchmaker Daniels ever collaborated with, and, working together, they produced a number of watches, including the very last piece to bear the ‘Daniels’ name, the George Daniels 35th Anniversary wristwatch. It is of no surprise then, that Robert White, an enthusiast of mechanics and engineering, possessed one of these rare, beautiful wristwatches. The watch is now offered at an estimate of £70,000-100,000. 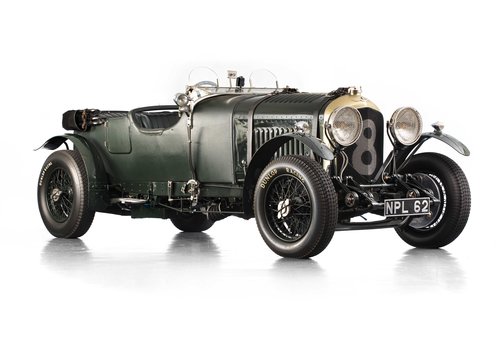