Two of the most celebrated names in Pre-war motorsport joined forces this past weekend as the Midland Automobile Club played host to the Vintage Sports-Car Club’s annual ‘Vintage and Post-Vintage Thoroughbred Meeting’ at the historic Shelsley Walsh Hill Climb on Sunday 3 July.
Forming the fifth round of the inaugural MSA-registered VSCC Speed Championship this season, the event attracted another capacity entry of over 120 Edwardian, Vintage and PVT Racing and Sports-Cars on a stunning Summer’s day at the historic Worcestershire venue – the oldest motor sport venue in continuous use in the world.

On the weekend of the launch of the car’s autobiography, written by Club Member and previous custodian Mac Hulbert, ERA R4D was always destined to be the star of the show, and thus it proved as Nick Topliss claimed Fastest Time of Day for current owner Brian Fidler.

Although unable to challenge Mac’s own Class Record in the revered voiturette, Topliss put on an impressive display in the ex-Raymond Mays charge, showing growing consistency in his first season competing the car with Timed Runs of 34.01 and 34.02 seconds, four tenths quicker than second placed man, Martin Spencer in the aforementioned Spider machine – winner at Shelsley last year in the rain.

It was a family affair in Class 16 too, where Tom Walker broke brother, Mark’s 19-year old record of 35.36 seconds in the Parker GN Special, as he set a Class leading mark of 34.89 secs to continue his stellar 2016 campaign in the Hispano-engined Amilcar Special.

Anthony Garner’s Lagonda Rapier and the Riley Falcon Special of perennial challenger, Rob Cobden were amongst the other Racing Cars Class Winners.

The next two rounds of the 2016 VSCC Speed Championship will take place at the Club’s celebrated Prescott Speed Hill Climb weekend on 5 - 7 August, including Friday’s ‘Long Course’ event (CLICK HERE), followed by the traditional two-day competition on the ‘Short Course’ (CLICK HERE), first utilised by the VSCC in 1938.

The Club’s next event is the Shuttleworth & Nuffield Trophies Race Meeting, taking place at Cadwell Park on Sunday 24 July (CLICK HERE), marking the 40 years since the Club’s first event at the Lincolnshire venue on 29 August 1976. 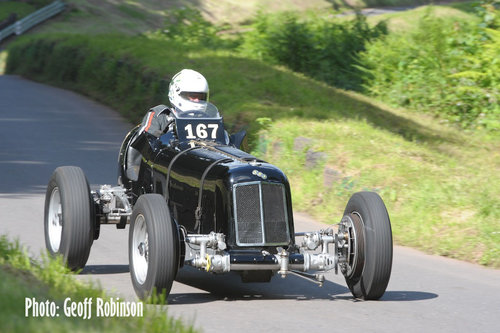