A rare 1904 Renault Type N-B that was owned by a French family for 60 years leads Bonhams traditional London to Brighton Run Sale of Veteran Motor Cars in London on Friday 4 November, estimated at £250,000-280,000.
The car was one of the first four-cylinder Renaults built. The Type N-B was introduced by Louis Renault as part of a reorganisation of the company's range of models following his brother Marcel's death in 1903. The Type N-B was a 14/20hp model powered by a conventional, four-cylinder side-valve engine of a little over 3.0-litres capacity, which featured the traditional Renault 'coal scuttle' bonnet with rear-mounted radiator.

This Type N-B 14/20hp, with the desirable swing-seat Tonneau coachwork, which can seat four adults in comfort - was owned by a French family from the 1920s onwards before being bought by an enthusiastic UK-based Veteran Car Club (VCC) member in the 1980s. Since then, the car has been rallied extensively in both the UK and continental Europe. Finished in red/black with black leather interior, it is offered with a VCC dating certificate and V5 registration document.

Another rarity is the 1904 Aster 16/20 hp, another four-cylinder motor car with four-seat Tonneau, estimated at £230,000-270,000. France led the world in motor car development in the early years of the 20th century, and Aster was there at the forefront. This particular car has a fantastic history. It has participated in the Paris-Vienna Rally in 2002; an epic drive from Brisbane to Sydney, Australia in 2005; and the successful completion of the 1,000 Miles Trial Re-enactment in 2000.

More recently, the Aster has taken part in the London to Brighton Veteran Car Run on five occasions (2011-2015) and has been described as one of the most practical Brighton cars. It has been known to the Veteran Car Club for many years and comes with a V5C registration document and a copy of 1904 Yorkshire registration records.

Another notable consignment is an early car from the 19th Century, a 1897 Daimler 4hp twin-cylinder 'Rougemont' Wagonette, estimated at £200,000-220,000. The first British-made Daimler took to the road in 1897, and this example, which cost £370 new, is one of the earliest that survives in original condition. Most were converted to the now conventional wheel steering, whereas this car has always retained its primitive and original tiller steering.

The Daimler has successfully completed many Brighton Runs and has an entry for this year's London-Brighton Run. With a Start Number of No. 4, (the oldest motor cars start at the front) it is capable of keeping ahead of the pack and giving the occupants a memorable run to the seaside.

One particularly interesting car in this year's sale is a 1903 Renault type n-c two cylinder 10hp Wagonette, registration no. BS 8243 estimated at £110,000-130,000. The car was discovered in Kent in 1969 by George Dorrington, a well-known Veteran Car Club enthusiast and founder member of the popular Renault Frères Club. George's discovery of the car at a Canterbury scrapyard yielded a near complete vehicle, from chassis to radiator, dated water reservoir tank marked '4/3' (for April 1903), bonnet, steering column, etc. all in a dismantled state. Its only major omissions were that it lacked its original twin cylinder engine and the majority of its wooden body had long since been lost.

For the next two decades George worked diligently on the Renault with the sourcing of a period correct Renault twin cylinder unit proving elusive until eventually one was tracked down in France.

George Dorrington finished the Type N-C in the mid-1990s and it was duly submitted for Veteran Car Club dating, and its year of 1903 confirmed then. Ever since, the car has been a regular sight on the London to Brighton Run.

Bonhams Motoring Department Senior Specialist, Rob Hubbard, who is overseeing the sale, commented, "This year we are able to offer some real rarities from the dawn of motoring presented in wonderful condition. Our top lots have proved their worth in many Veteran Car rallies all over the world and I expect a lot of interest from collectors keen to acquire a piece of motoring history."


Note: Each year, on the Friday before the world-famous London to Brighton Run, Bonhams holds a Sale of Veteran Motor Cars. This year's Run takes place on Sunday 6 November. The Sale consists of 215 lots and in addition to Veteran cars also offers quantities of rare Automobilia.

For further information of this and other Bonhams Motoring Department Sales, please CLICK HERE. 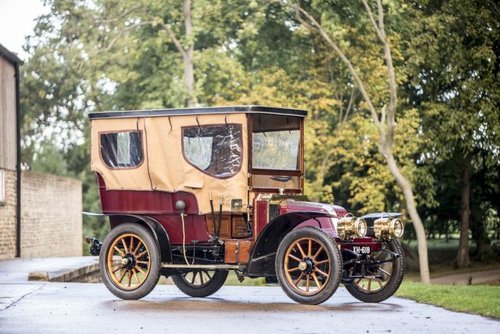