Our Autumn Sprint will bring another fantastic VSCC Speed Season to a close at the famous Goodwood Motor Circuit tomorrow, Saturday 22 October, and with it the culmination of the Club’s hugely successful, inaugural Speed Championship.
As usual, entry is free to Spectators so why not join us for the traditional end of season celebrations? Yet another capacity entry of over 100 Pre-war Racing and Sports-Cars take to hallowed Goodwood – notorious for its challenging, fast and flowing airfield circuit – for their final track activity of the year.

The day represents the last chance for our Competitors to accrue points towards many of the Club’s Annual Aggregate Race/Speed Trophies so expect to see some fierce competition throughout the 16 Pre-war Classes on show, with a number of those ‘in the running’ taking part.

Amongst the Sports-Cars, Duncan Potter competes in his MG Montlhery Midget – fresh from his success in this year’s Set 3 ‘Owner-Driver-Mechanic’ standings at VSCC Race Meetings (CLICK HERE for more information) – which he shares with partner, Emma Withers, one of a number of double-driven entries on the day. We also look forward to an epic ‘Chain Gang’ battle in Class 3, including a three-way Blakeney-Edwards contest in a trio of Frazer Nash Super Sports machines.

Competition in the Racing Car classes is sure to be equally exhilarating, with the day’s expected ‘FTD’ candidates amongst them. We look forward to a debut performance for Matt Johnston in his Vintage French Three Wheeler Darmont de Course, whilst two of the VSCC’s ‘Young Guns’ will undoubtedly enjoy memorable outings in ERA machinery, with James Crabb sharing R12C with father, Terry and James Topliss sharing father Nick’s R4A with fellow ERA exponent, Ben Fidler.

Meanwhile, expect to see Nick Topliss amongst the frontrunners as he fulfils ‘Works Driver’ duties for Brian Fidler once more in the indomitable ERA R4D, having already tasted victory at Brooklands, Shelsley Walsh, Prescott and Pembrey this Summer. As well as his fellow ERA pilots, he will face strong competition from perennial challengers such as the Riley Falcon of Rob Cobden, Ian Baxter’s Alta, Julian Grimwade’s Frazer Nash Norris Special and current 2016 Speed Championship leader Tony Lees, winner of last year’s Autumn Sprint in tricky conditions in the ex-Ron Footitt AC/GN ‘Cognac’ Special.

Spectators are most welcome to attend and entry is free, although we do ask that you support us and purchase an event programme or two on arrival!

Parking is also free with a dedicated area outside the circuit for Classic vehicles whilst those arriving in Pre-war Cars will be directed to the Inner Paddock parking area. Catering facilities will be available on site, alongside Trade Stands and the Club Display, selling a selection of our Regalia range, including the latest VSCC history book, 'A Portrait of the Vintage Sports-Car Club, 1934-2014’ by Tom Pellow, as well as the Club’s 2016 Christmas Card, just in time for the festive season (CLICK HERE for details of our current Special Offer).

Directions
Goodwood is situated 2 miles north of Chichester, only 60 miles from London, 30 miles from Brighton and Southampton. Follow the brown chequered flag tourist signs from the A27 (to the Motor Circuit, not the House).  The Postcode is PO18 0PH. 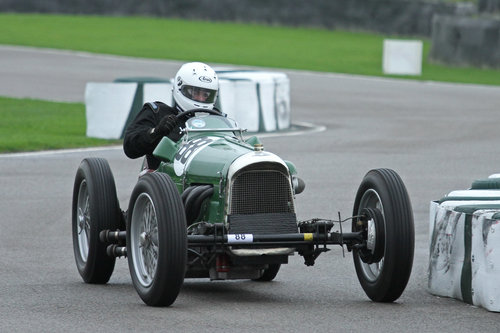