2020 was seen off in the sunshine with a large entry at the Winter Driving Tests at Bicester Heritage
The sun shone on the VSCC at Bicester.

With lock down ending three days before the Winter Driving Tests event, Organisers, TOPO, Marshals and Competitors held their breath and kept their fingers crossed that they would take place.

Marshals and Competitors were keen to get out and enjoy themselves with a surfeit of Marshals and a reserve list with an entry list of 101.

Mark Elder and Harry Fraser excelled themselves with a great selection of tests, not too taxing on the memory but lots of opportunity to press the load pedal and have some fun.

Five new Members entered their first VSCC event, there were thirteen entries in the Light Car Class, a couple of entries in the Edwardian Class and a nice selection in the other classes to make for an interesting field.

Hero of the day has to go to Michael Power in his Rolls-Royce 40-50 Silver Ghost, not a natural choice for a driving test.

Eventual winner George Diffey was helped in his car preperation by Grandad Phil who knows a thing or two about driving tests. 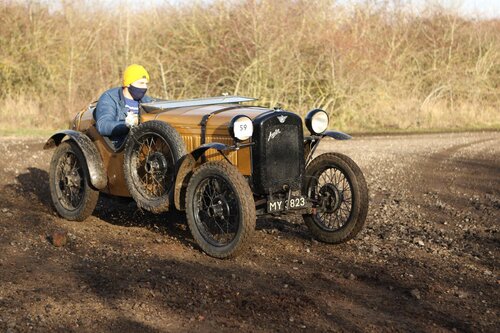