The April Issue of Classic & Competition Car is now available to download.
The Motor Racing season finally starts in the UK and the April issue has a report from the first 750 Motor Club Race Meeting of the year at Donington Park. It also contains previews of two of the most important Racing series in the UK, the British Touring Car Championship (BTCC) and the British GT Championship, with BRDC Formula 4.

There is also a report from the 74th Members Meeting at Goodwood, which included some of the greatest Group 5 Sports Cars ever made. We also have a report from the final round of the Tasman Revival Series, from Phillip Island, Australia.

For Rally fans we have the Mid Wales Rally and also the Tour of Epynt which saw very different weather conditions in just a few days.

Finally for the Classic Car fan we have a report from the Restoration and Classic Car Show at the NEC, plus the Silverstone Auction from that event and also from the Alfa Romeo Owners Club Meeting at Coventry Transport Museum.

Plus all our usual news and features. 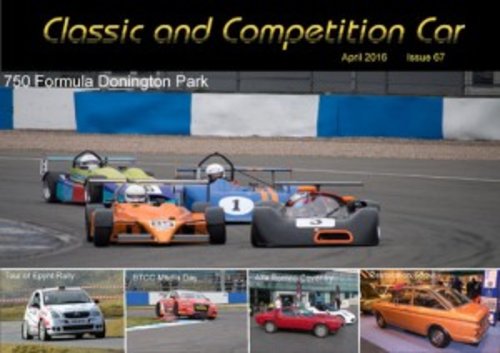