The fierce ‘Red Dragon’ Aston Martin Speed Model is revealed as an early consignment for Bonhams Goodwood Revival Sale, taking place on Saturday 10 September.
The historical racing car has an outstanding competition history that includes the Italian Mille Miglia, the RAC Tourist Trophy in Ulster, and France’s famed Le Mans 24-Hour Race. It is estimated at £1,600,000-2,000,000.

Built in 1936, the ‘Red Dragon’ was tailor-made to be the ultimate ‘Ulster’ Aston Martin, the car created for the British driver, Richard ‘Dick’ Seaman, to challenge Germany’s sophisticated new BMW 328s in the most important UK race of the period: the RAC TT on the Ards circuit in Northern Ireland.

Unfortunately, a win with the Aston wasn’t to be. The car was subsequently sold to Dutch owner/driver, Eddie Hertzberger, a few years later. He competed in this Aston Martin in the 1,000-mile round-Italy Mille Miglia and also in both the Belgian Spa and French Le Mans 24-Hour races. Hertzberger also won at the 1937 Grand Prix des Frontiéres meeting in Belgium.

The wealthy Welsh amateur racing driver, Dudley Folland, acquired the car after the war. Carmarthenshire-born Folland had started his racing career under the alias ‘Tim D. Davies’, contesting the 1935 Le Mans with a Frazer Nash, before graduating to the powerful Aston.

John Polson, Bonhams Motoring Specialist, said: “Folland chose ‘Red Dragon’ because it was the most competitive British-built car available in the early years after the war.

“Having proven itself in Hertzberger’s hands, it was the best British race car available, and Folland proved very competitive in it, finishing third in the Paris 12-hour race in Montlhéry in 1948, and holding 2nd in the Spa 24-hours before crashing dramatically very near the finish.”

Both races were won by the new Ferrari 166 Spider Corsa V12, driven by Luigi Chinetti. Folland was so impressed by the Ferrari’s speed and agility that despite his loss, he ordered one for himself, and in the meantime modified the Aston Martin after its Spa crash with lightweight bodywork resembling the Ferrari.

Tim Schofield, Bonhams UK Motoring Director, said: “This is an incredibly historic Aston Martin. Having competed in so many of the most renowned great sports car races of the 1930s and 1940s, it is regarded as the ultimate ‘Ulster’ Aston Martin and its provenance, including Dick Seaman, Eddie Hertzberger and Dudley Folland, is impeccable.”

For further information about the Goodwood Revial Sale on 10 September, or for more the Bonhams Motoring Department, please CLICK HERE. 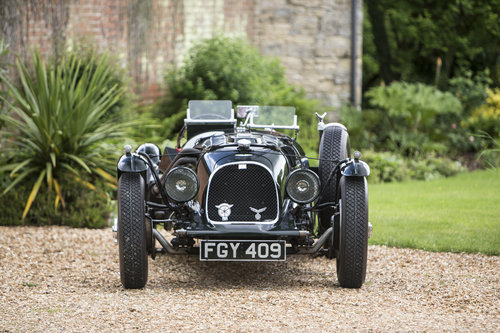