Race Results and Photo Gallery of the Club’s Pre-war Sports-Cars Race at the Castle Combe Autumn Classic on Saturday 1 October are now live.
The VSCC Pre-war Sports-Cars Race has been a mainstay of the venue’s Autumn Classic programme since the inaugural event in 2012, as this year’s successful edition took place in a welcome window of warmth and sunshine on an otherwise wet day of Historic motorsport at the famous Wiltshire venue this past weekend.

In spite of the changeable weather, the popular event drew another enthusiastic crowd of Spectators, keen to take in the circuit’s only dedicated Historic meeting of the season.

As in previous years, the VSCC Race was scheduled first in the day’s programme, with an early start for the 20-strong grid for the morning’s Qualifying Practice in the drizzling mist. As such, it came as no surprise to see Patrick Blakeney-Edwards skilfully lead the way in his exuberant Frazer Nash Saloon ‘Owlet’ – providing not only shelter from the elements but a fixed rear axle to take advantage of the slippery conditions.

The sun soon appeared over the Lunch Break and so, by the time of the race, the Nash’s advantage looked to be disappearing fast with a drying track. And so it proved as fellow front row occupier, Sam Stretton’s feisty Alta launched into the lead from the start, quickly building a significant lead of 4 seconds at the end of the first lap, which was only to extend further as the experienced pilot took a dominant victory.

The battle for the remaining podium places was a much tighter affair as Blakeney-Edwards did battle with Mark Gillies in Dick Skipworth’s Aston Martin and the HRG of Andrew Mitchell, with Mark Brett for company early on as he made his usual lightning start in the V8-powered Ballamy-Ford before falling back. Despite his best efforts – thrilling the crowds as he power-slid his way around Camp Corner on each lap – the Nash proponent lost out as Gillies eked out  a comfortable enough lead to claim second, with the HRG less than a couple of seconds ahead of ‘Owlet’ at the flag.

The Ecurie Bertelli prepared Aston Martin Ulster ‘CMC 614’ was another welcome addition to the grid with VSCC stalwart, Simon Diffey enjoying the role of ‘Works Driver’. The ex-Derrick Edwards machine – founder of Aston Martin specialists, Morntane Engineering and precursor to Ecurie Bertelli – was one of just 21 ‘privateer’ Ulsters built by the Bertelli Family-led Aston Martin company in the 1930s, taking part in such illustrious events as Le Mans, the RAC Tourist Trophy, Mille Miglia and Targa Abruzzo, the latter co-driven by none other than Count ‘Johnny’ Lurani, who would go on to found Formula Junior.

The grid was another true reflection of the wonderful array of Pre-war Sports-Cars that compete with the VSCC, with representatives of Alvis, MG, Lagonda alongside the lone Morgan Three Wheeler of Simon Edwards, enjoying his first full season with his Vintage Aero Supersports.

Besides the VSCC spectacle, there were also races for some of the Club’s Racing Associates, including F3 (500s), Formula Junior, HRDC and FISCAR, as well as popular grids for Historic Jaguars and Austin Healeys.

We would like to extend our thanks to Castle Combe Racing Club for hosting us once again and all the Officials and Marshals at Castle Combe Circuit who ran the day. We also thank our racers, with particular mention of ‘Set 3’ champions, John Guyatt and Lesley Macalpine, who again worked so hard not only to assemble another wonderful grid of Sports-Cars to take part but also provided such warm hospitality in the Paddock on the day.

Finally we would like to thank local Club Member, Paul Weaver and family, who kindly oversaw the Club’s Spectator Pre-war Car Display in ‘Club Village’, and to Nigel Hall and son, Rory Oliver-Hall for managing the Club Display.

Results and a selection of photos from the VSCC Pre-war Sports-Car Race are now available at the event page (CLICK HERE).

Full results from the day can be found at the Timekeepers’ website (http://www.tsl-timing.com/event/163968). 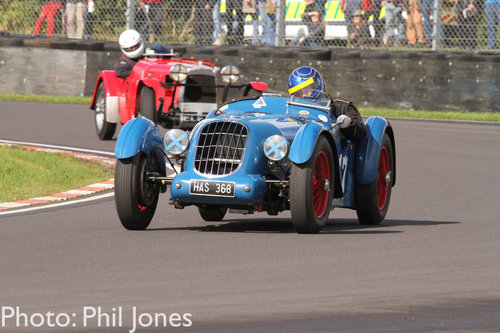