Duncan Potter has claimed the 2016 ‘Owner-Driver-Mechanic’ title as the best performer in the Club’s ‘Set 3’ Races for Standard & Modified Sports-Cars this season.
Suffolk-based Potter topped the standings after this year’s five VSCC Race Meetings, with consistent and strong performances in the Under 1100cc Class in his historic MG C-Type Montlhéry Midget – one of a series of replica cars built from 1931-32 based on ‘EX120’, a special one-off machine developed from the MG M-Type for George Eyston to successfully break the 750cc Class 24-Hour record at Autodrome de Montlhéry in France.

The Potter example boasts an impressive period history, including racing at Brooklands and Donington throughout the 1930s and in Northern Ireland in the immediate Post-war years. The car then spent decades stored in a barn before it was bought by the Potter family in 1996, after which it was fully restored and continues to be used extensively on VSCC Race and Speed events.

Duncan was presented with the coveted ‘ODM’ Trophy at Mallory Park last month, having secured the necessary points in the last round of the year, beating runner-up and leader of the 1101-1500cc Class, Mark Groves in the Frazer Nash Emeryson TT Rep and third place Mike Preston, long-time leader during the year in his Bugatti Type 35B and winner of the Over 3001cc Class, but absent for the season finale.

Introduced by John Guyatt in 2009, the ‘Owner Driver Mechanic’ Awards are designed to encourage original specification Pre-War Sports-Cars to come out racing at VSCC Meetings.  Aimed at the amateur racing enthusiast, points towards the annual ‘ODM’ standings are weighted according to whether the car is owned, driven and maintained by the entrant, although it is not necessary to do all three in order take part. 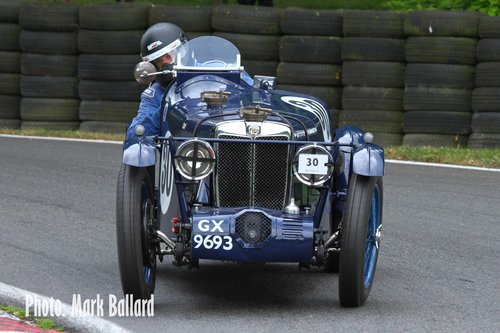