VSCC set for a ‘Vintage’ Weekend in Derbyshire

The Club are delighted to return to Derbyshire this weekend for two days of Vintage motoring, with Saturday’s John Harris Trial and more leisurely Derbyshire Tour on Sunday.
Over 120 Pre-war cars will be descending on Ashover, near Matlock – situated just to the eastern boundaries of the beautiful Peak District National Park – where event headquarters for both elements will be based once again at the local Village Hall. There, the organising teams will ensure another welcoming atmosphere for the hundreds of Competitors, Marshals and other participants.

A capacity entry of over 100 cars will take on the challenge of Saturday’s Trial. This year’s edition marks 30 years since its re-inauguration in 1986 and sees a new team at the helm, led by Joint Clerks of the Course Louise Bunting and Richard Parsons – regular Trials winners in their 1919 GN Touring – and Deputy Clerk, Steve Lister.

Competitors will face 14 challenging sections over the course of the day, including several where Spectators will be most welcome to come and watch the action which starts at 9.00am. Download full Spectator Information for full details (CLICK HERE).

Last month’s Exmoor Fringe Trial, the traditional season opener, saw some familiar faces atop the final standings with 2014 Trials Champion Matt Johnston in his Austin 7 ahead of other perennial challengers in incumbent Donald Skelton’s Austin 7 and David Golightly’s Ford Model T Special, and Andy Johnson’s Bugatti Type 13 Brescia also a welcome addition amongst the frontrunners. However, it was reigning Long Wheelbase Class Champion, Paul Jeavons who claimed the overall victory in his Vauxhall 30-98, with Jeremy Brewster, another top performing Class 2 car in his Lea-Francis P Type. Will they be able to continue the trend in Derbyshire this weekend?

At the end of the day, all Competitors will gather back at Ashover for the announcement of the day’s results.
To complement the weekend, Club Member John Higgs and his team host their 3rd Annual Derbyshire Tour to celebrate Mothering Sunday, offering those taking part a relaxed day’s motoring to wind down after the excitement of Saturday’s Trial.

The route will follow the back roads of the beautiful Peak District in the heart of Industrial Revolution country, and will include a visit to one of the region’s historic sites – Leawood Pumphouse on the Cromford Canal. 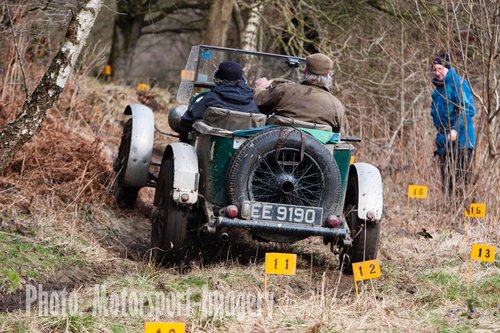