A 1924 Rolls-Royce Silver Ghost, with bespoke features designed for Lord Mountbatten – uncle of Prince Philip, Duke of Edinburgh, and second cousin once-removed of Her Majesty the Queen – is now offered at Bonhams Goodwood Members’ Meeting Sale, taking place this Sunday 20 March.
The vehicle’s modifications included a raised, streamlined bonnet, a novel mechanical headlight dipping mechanism and, much to Rolls-Royce's chagrin, he also instructed that its trademark 'Spirit of Ecstasy' mascot be replaced with the figure of a naval signaller.

The alterations were designed by Lord Mountbatten himself, who, whilst enamored of the marque, believed he could improve upon the Rolls-Royce design.

After Mountbatten’s ownership, the Ghost changed hands several times, disappearing from public record from 1939 to 1966. It reappeared after an Oxford dental surgeon, Captain Ralph Symmons, purchased the Silver Ghost in the South of France. He returned home with the motor car, removed the French number plates, and made an incredible discovery – a London registration that traced the Silver Ghost back to Lord Mountbatten’s ownership.

Captain Symmons restored the Rolls-Royce, which had survived in remarkably original condition, and after its completion drove the car to Lord Mountbatten's home at Broadlands in Hampshire, where its first owner was reintroduced to his old car.

Years later Captain Symmons decided to sell the Silver Ghost and offered it to Lord Mountbatten. It is documented that Lord Mountbatten arranged for the car to be purchased by a friend (the current vendor). Dated 9 November 1978, one of his letters states: 'Although he will be the legal owner of the car, it will, in fact, be on permanent loan to me until such time as my family and I are in a position to repurchase it from him at the price he is paying for the car.'

Sadly, Lord Mountbatten got few opportunities to enjoy his old Silver Ghost; on 27 August 1979 at Mullaghmore, County Sligo he was assassinated by the Provisional IRA, who had placed a bomb aboard his boat, the Shadow V. The explosion also killed his grandson, Nicholas, and two others.

To order a catalogue or for further information from the Bonhams Motoring Department please CLICK HERE. 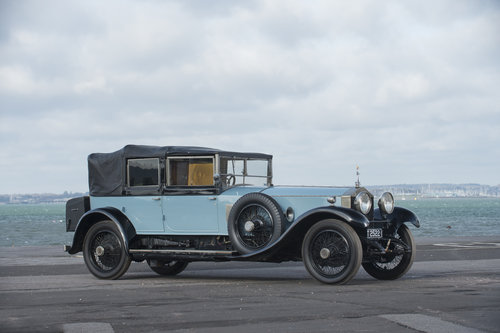