The traditional VSCC Speed Season curtain-raiser takes place this Sunday 1 May at Curborough, the home of the Shenstone and District Car Club, near Lichfield in Staffordshire.
The celebrated Curborough Speed Trials have been a feature of the Club’s events calendar for over 50 years and is sure to be another wonderful day of Vintage motorsport. Furthermore, the day will mark the start of the Club’s highly-anticipated Speed Championship, which will incorporate ten rounds of the Club’s most popular Sprint and Hill Climb events throughout the 2016 season.

The event has attracted yet another full entry of over 100 Pre-war Racing and Sports-Cars, with over 30 revered Pre-war marques on show for this weekend’s instalment.

From Veterans and Edwardians to Vintage and Post-Vintage Thoroughbred, all the celebrated eras of Pre-war motoring are represented. Mark Walker’s 1905 Land Speed Record holder Darracq 200HP is one of oldest competing and is one of a baker’s dozen of Edwardian-era machines on show, including Past President, Roger Collings in the family’s famed 1912 Zust Brixia.

After victory at the Pomeroy Trophy earlier this year, Dudley Sterry is tipped for top Sports-Car honours in the ever-competitive HRS but expect to see plenty of action throughout all the Classes as Competitors battle for points towards the annual Championship standings, whilst intermarque bragging rights will be hotly contested, with strong representations for several manufacturers, including Austin, Frazer Nash, Vauxhall and Riley amongst others.

A Class record holder since 2006, Carl Gray is a firm favourite amongst the small capacity Racing Cars in the Hardy Special, and could even battle the higher powered machinery for the overall ‘FTD’ spoils. He will be in exalted company, however, with several perennial challengers amongst them, including Robert Cobden in the Riley Falcon Special, Ian Baxter’s Alta 61 I.S. Single Seater and last year’s winner, Tony Lees in the AC/GN Cognac Special, hoping to again evoke the famous car’s previous pilot, Freddie Giles, still a Vintage record holder at the venue. Julian Grimwade and Tom Walker, also renew their rivalry in the over 3000cc bracket in the Frazer Nash Norris Special and Hispano-engined Amilcar Special respectively and will also be front-runners.

Conveniently situated 2 ½ miles north-east of Lichfield in the centre of the country and a short drive from the A38 at Fradley, Curborough provides a welcoming atmosphere for all of its visitors, whilst all are encouraged to bring their picnics, as per the Bank Holiday tradition.

Practice Runs start at 9.00am, followed by Lunch Break, with Competitive Runs in the afternoon. Tickets are available on the gate at a cost of just £10 per person, while Under 16s go free.

We also take this opportunity to remind VSCC Members that the Club Office will be closed this May Bank Holiday Monday. 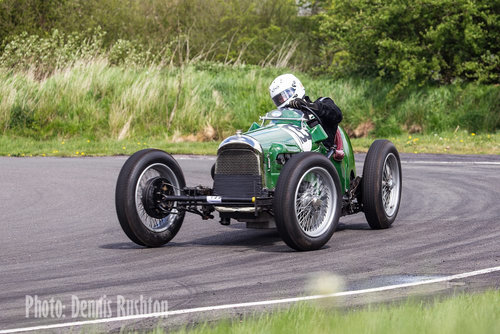