Following our fantastic Speed Season opener at Curborough last weekend, attention now turns to the first VSCC Hill Climb of the year, taking place at Wiscombe Park near Honiton in Devon this Sunday 8 May.
A full entry of over 130 Pre-war and Historic Racing and Sports-Cars from such celebrated manufacturers as Alvis, Bentley, Bugatti, ERA, Frazer Nash, Riley and many more will descend on the stunning grounds of Wiscombe House, home to the Chichester family since 1953, located east of nearby Ottery St Mary, to take part in one of the Club’s most popular events.

With the sights, sounds and smells of Vintage Racing Cars gracing the south Devon parkland, the unique and unrivalled event transports spectators to a bygone era but that does not mean the competition is any less relaxed. At approximately 1000 yards (914 metres) in length and with an average gradient of 1 in 13.6 – the steepest section at the Martini Hairpin is 1 in 6.9 – the course is one of the most challenging and enjoyable in the UK; long, quick straights, tight hairpins and a changing open to tree-lined track, it is a delight for the Competitor and Spectator alike.

Those attending will witness the usual eclectic array of machinery, from road-going Sports-Cars to out-and-out Racers, spanning six decades of motoring heritage. Past President, Roger Collings’s 1912 Zust Brixia is the day’s oldest entry – not seen in Hill Climb action since Prescott in 2013 – whilst the 1960 Cooper T56 of Alan Harrison represents the other end of the age scale.

Last year’s winning ERA R4A is absent this year so there will be a new name atop the standings this time around, with the car’s owner, Nick Topliss playing the role of ‘Works Driver’ in the much celebrated sister ERA R4D of Brian Fidler. He will start the day the slightest of favourites, but faces stern competition on his Hill Climb debut in the car from a host of perennial VSCC challengers. Dorset-based Terry Crabb will hope for ‘relative’ home advantage in ERA R12C, whilst Rob Cobden is previous winner at Wiscombe in his Riley Falcon Special. Also watch out for the form trio of Tom Walker (Amilcar-Hispano), Julian Grimwade (Frazer Nash Norris) and Tony Lees (AC/GN Cognac), who were top performers at last weekend’s Curborough Speed Season opener, the former taking the ‘FTD’ crown on that occasion.

In addition to the track action, Spectators will be able to enjoy free access to the Competitors’ Paddock at the bottom of the hill where they can see the cars at close-hand and talk to the drivers, along with a number of Trade Stands, hot/cold catering facilities and licensed bar – be sure to purchase your ice-creams early as they will sell out fast!

Sunday’s action will get underway with Practice Sessions run in batches from 9.00am until the Lunch Break at approximately 1.00pm. The afternoon’s Competitive Runs will commence at 2.00pm, with each driver getting two timed runs.

Tickets are just £15 on the gate (£12 for VSCC Members) and Under 16s go free so it is the ideal day out for the whole family. Come and enjoy one of our most well-loved and friendliest events.

Wiscombe Park is located north of Blackbury Castle, west of Southleigh village. Follow 'AA' signs from the A3052 near Sidmouth and from Honiton (Sat Navs use postcode EX24 6JE). Visit www.wiscombepark.co.uk for more information. 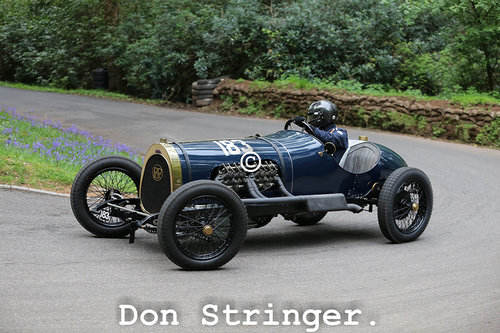