VSCC and Brooklands Join Forces for the Double Twelve Motorsport Festival this weekend!

This year’s Brooklands Double Twelve Motorsport Festival takes place this weekend, jointly organized by Brooklands Museum and the Vintage Sports-Car Club, which this year features a special ‘Silver’ theme in celebration of the 25th Anniversary of the official opening of Brooklands Museum to the public in 1991.
The now well-established format of three separate competitive events (Speed Trials, Driving Tests and Concours d’Élégance) held over two days, with aggregate scores from any two going towards overall Double Twelve awards, continues. But the status of the Concours is raised this year with a special “All Things Silver” Class in recognition of the 25th Anniversary of the official opening of the Museum in 1991.

In true Brooklands tradition, the Double Twelve Motorsport Festival is held on the weekend closest to the date the original track opened in 1907.

The three stand-alone competitive events are:

The structure of the competitions allows entrants to choose which elements best suit them and their vehicle across both days making full use of the historic terrain at Brooklands and the circuit at neighbouring venue Mercedes-Benz World.

The classes within each competition are structured to give all ages of car from Veterans to 1970s Classics, and all types from nimble Sports-Cars and Thoroughbred Racers to stately Tourers, an equal chance of picking up an award, making this a very inclusive weekend for Competitors, and an enthralling one for Spectators.

Saturday’s Speed Trials are essentially for Pre-war cars and this year will form a round of the VSCC’s inaugural MSA-registered Speed Championship; the Driving Tests and Concours are open to vehicles up to the 1970s, and include classes for vehicles of a type that could have raced at Brooklands had the track re-opened after World War Two, such as Jaguar XK120s and AC Cobras.

The special “All Things Silver” Class for the Concours, celebrating the 25th Anniversary of the official opening of Brooklands Museum to the public in 1991, caters not only for cars with silver-painted or polished aluminium coachwork, but also those with “silver” in their model names, such as Rolls-Royce Silver Ghosts. Other notable classes in the other competitions include one for that perennial favourite, the aeroplane-engined Edwardian cars, in the Speed Trials, alongside those for Standard and Modified Sports-Cars of differing eras.

Each event will have its own class and overall winners, but to qualify for a Brooklands Double Twelve award, an entrant must compete in any two of the three events and the combined scores of these will decide their Double Twelve placing.

All the up-to-date Festival information can be found on the Double Twelve button at www.brooklandsmuseum.com. Entrants are offered the exclusive use of a hospitality area in the charming, period splendor of the Edwardian Clubhouse, the chance to drive on motoring ‘hallowed ground’ and when competing, will be in the capable hands of the VSCC and Brooklands Marshals.

In addition to the competitive events, there is a list of other attractions throughout the weekend. The Vintage Mobile Cinema will be in attendance, showing period Brooklands films and news reel footage during both days, the Test Hill Challenge will be running on both days, providing much merriment as it invites practically anything on wheels (or legs) to reach the summit of that most famous peak, with Sunday lunchtime seeing a cavalcade of vehicles on the Mercedes-Benz World circuit, as well as Sopwith Camel engine runs over the weekend and Spitfire Flypast on Sunday (subject to operational conditions).

Many Car Clubs will be coming along to showcase their cars, and the Sinclair C5s will be back. The weekend will culminate in the prize-giving ceremony in the main Paddock on the Sunday. For Spectators, a day ticket gives access to all areas on both sites, Paddock and grandstand views along with the Museums exhibits, collections and facilities.

Spectator tickets will be at the normal Museum admission prices of £11 for adults, £10 for Seniors and Students, £6 for Children (aged 5-16) and £30 for a Family ticket admitting 2 adults and up to 3 children. The Concorde Experience is £5 for adults and £3 for children, and rides in the 4D Theatre, including the Napier-Railton Experience, are £4 for adults and £2 for children. Visit www.brooklandsmuseum.com for more information. 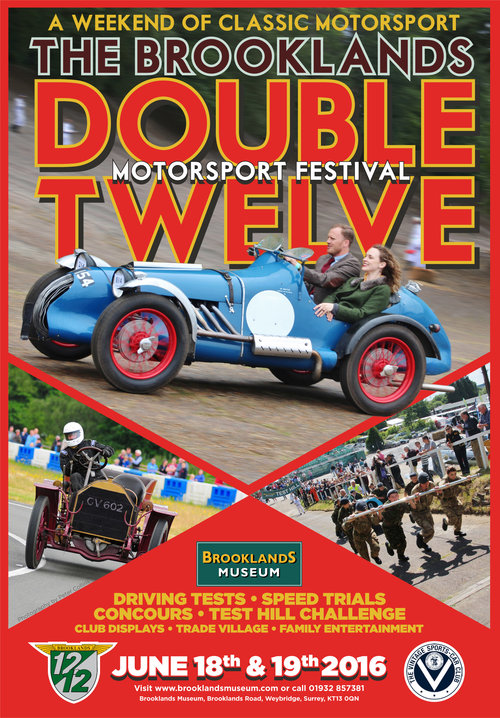