ERA, Frazer Nash and Jaguar amongst the winners at the Brooklands Double Twelve Motorsport Festival

It was another triumphant Double Twelve Motorsport Festival this past weekend, the 18/19 June, where Edwardian, Vintage, PVT and Classic machinery gathered to take part in the prestigious competition co-hosted by Brooklands Museum and the VSCC.
The now well-established format of Speed Trials, Driving Tests and Concours elements, alongside the ever-entertaining Test Hill Challenge, Car Club displays, Hurricane fly-past, music and other appropriately Vintage entertainment attracted another fantastic audience of enthusiasts in a wonderful celebration of motoring across the historic Museum site and neighbouring Mercedes-Benz World circuit over the two days.

Saturday’s Speed Trials proved as popular as ever, accommodating another capacity entry of more than 100 VSCC Competitors in their Pre-war Racing and Sports-Cars, with the event comprising the fourth round of the Club’s inaugural Speed Championship; David Cranage was a welcome Post-war entry in his Lotus Mk VI. Crowds were also treated to a very special demonstration by three prized racing assets ahead of the afternoon’s competition, including the Museum's Napier-Railton, Lorne-Jacobs' recreation of the 1927 Napier-Campbell ‘Bluebird’ land-speed-record breaker and the Marker Bentley from Stanley Mann Racing.

Competition was rife throughout the afternoon’s Timed Runs, with close contests across the classes. There was success for the Austin 7s of Joe Tisdall and Jeremy Flann, whilst Simon Blakeney-Edwards and Ian Bingham also delivered Class victories for Frazer Nash, alongside rival Riley-pilots Kevin Morton and Greg Lerigo, the leading Sports-Car in his 12/4 Special ‘Shifty’.

Peter Tierney’s Vintage Lea-Francis also led its respective Class, as did the Alvis Firebird/Speed 25 Special of David Lewis and the Railton of John Fack, despite a thrilling spin earlier in the day. A regular top performer since his debut last year, the 1917 Hudson Super Six of Hugh Mackintosh again headed the Edwardian classes.

Pre-war ‘royalty’ led the way, however, with sister ERA machinery atop the overall standings. Sharing R12C with son Jamie on the day, Terry Crabb overcame the challenge from Rob Cobden’s Riley Falcon Special, the AC/GN ‘Cognac’ of Tony Lees, the day’s top Vintage performer, and Sue Darbyshire , the Top Lady performer in her Morgan Three Wheeler, amongst others, to claim Class honours and runner-up spot.

The revered ‘Fastest Time of Day’ accolade went to Nick Topliss, seemingly untouchable in the imperious R4D, which he piloted on behalf of current custodian, Brian Fidler, setting a new track record of 39.22 secs in the process.

The following day saw several of the Speed Trials’ Sports-Car entrants take part in another entertaining Driving Tests competition alongside an eclectic gathering of other Edwardian, Pre-war and Post-war Sports-Cars, Tourers and Saloons.

Designed by VSCC Vice-President and Brooklands Trust Members Secretary, Kevin Lee – Clerk of the Course for the VSCC’s annual New Year Driving Tests at the venue – it was assured to be an enjoyable day of motorsport, with five different challenges located across both MB World and the Museum site, including the Members’ Banking, Finishing Straight and, of course, Test Hill.

Amongst the ‘younger’ Classic machinery on display, there was Class success for regular Double Twelve contestants, including 2013 overall champion, David Bracey in his Austin Mini Super Deluxe, Jaguar D-Type and XK 120 of Roger Heard and Trevor Wooding respectively, Marc Hanson’s MG YB Saloon and Steven Taylor in his Ford Sierra XR4I. Geoff Davidson was also a winner on his Double Twelve debut in the Triumph Spitfire IV.

The Pre-war classes of course entertained, with David Biggins leading the Veteran and Edwardian cars in his 1916 Dodge Roadster, whilst Chris Leeper’s Riley Lynx topped the Touring car rankings. With eighteen entrants, the Pre-war Sports-Cars was the day’s best-supported Class, with Tom Thornton not only claiming Class but overall victory in his Frazer Nash/BMW 319/28 Special.

Busy on both days was the experienced Judging Team for the Concours d’Elegance element of the Festival, led by Jon Purser, with a number of Competitors of both the Speed Trials and Driving Tests also putting their prized machinery forward for assessment alongside a wonderful array of other fine motoring examples.

Each car was awarded marks on a range of familiar Concours criteria, including both originality and condition of bodywork, interior, engine and chassis whilst a more unique ‘Sprit of Brooklands’ score was also applied, taking into account patina, Brooklands and general historical interest and overall character, all in keeping with the ethos of the Double Twelve Festival.

Once again showing their dedication to the event, Neil Manley and family were named the Best Dressed Crew of the weekend with all adorned in 1960s styling.

In addition to the traditional classes, including both Pre- and Post-war ‘Grand Tour’ and ‘Spirit of Brooklands’ line-ups, Pre-1918 Great War Remembered and Historic Brooklands Cars of the 1920s and 30s – boasting actual Brooklands Competition history – was a special ‘All Things Silver’ category, celebrating 25 years since the re-opening of the Brooklands Museum in 1991. Fittingly, the Class was won by the Museum’s own cherished ‘ally-bodied’ Napier-Railton, ahead of 'The Silver Dawn', a stunning example of the 1908 Rolls-Royce Silver Ghost, owned by Robert Gaines-Cooper and displayed by P & A Wood.

With the best scores in two of the three elements counting towards the prestigious overall Double Twelve competition, Trevor Wooding was crowned this year’s Champion in Sunday afternoon’s Winners’ Ceremony in front of the famed Brooklands Edwardian Clubhouse, with his 1950 Jaguar XK 120 the only car to claim Class victories in two events, ahead of Tom Thornton’s Frazer Nash/BMW and the Berliet Curtiss of John Dennis, who also gathered with several of the weekend’s other successful entrants, including Amelia Wooding, Top Lady Competitor for the second time in her MG Midget Roadster.

The Club would like to thank Allan Winn and the Brooklands Museum team for again inviting us to co-host this magical weekend. We also thank all the Competitors and participants who supported all of the competitive elements organised by the VSCC and most of all, the many Officials, Marshals and other volunteers from both the Club and Brooklands organisations.

Download the Results from all three competitive elements of the weekend, as well as the Overall Double Twelve Awards and standings (CLICK HERE), whilst a selection of photos from the weekend can also be viewed at the three Event Pages. 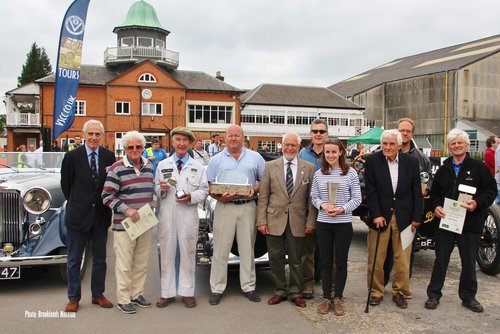