Ever the highlight of the Club’s events calendar, the Midland Automobile Club’s Shelsley Walsh Hill Climb plays host to the Vintage Sports-Car Club this weekend, bringing together two of today’s most celebrated names in Pre-war motorsport on Sunday 3 July.
Another capacity entry of over 120 Edwardian, Vintage and Post-Vintage Thoroughbred Racing and Sports-Cars will descend on the historic Worcestershire venue – the oldest motor sport venue in continuous use in the world – for the ‘Vintage and Post Vintage Thoroughbred Meeting’, traditionally run by the MAC on behalf of the Club.

Forming a round of the inaugural MSA-registered VSCC Speed Championship this season, the Pre-war classes have unsurprisingly attracted another wonderful array of machinery with many of the Club’s regular Speed Competitors in attendance to accrue those all-important points towards the season’s standings.  The usual host of revered marques are all represented, such as Alvis, Austin, Bentley, Bugatti, ERA, Frazer Nash, Lagonda, Lea-Francis, MG, Morgan, Riley and more with a host of the famed Shelsley ‘Specials’ amongst the line-up.

Following his ‘FTD’ success at the Club’s Brooklands Speed Trials a fortnight ago, Nick Topliss again plays the role of Works Driver for Brian Fidler’s 1938 ERA R4D; one of the most successful racing machines ever over almost 80 years of continuous competition, the revered voiturette has seen particular success in Hill Climbs through the decades, especially at its ‘spiritual home’ of Shelsley Walsh, in the hands of such luminaries as Raymond Mays, Ron Flockhart and Ken Wharton, through to the present day with continued success in numerous VSCC and other Historic events. The weekend also coincides with the launch of the highly-anticipated autobiography of the car, written by Club Member and previous custodian, Mac Hulbert, part of the celebrated ‘Great Cars Series’ published by Porter Press.

There will be plenty of competition for R4D for the day’s spoils, including the sister ERA R12C of Terry Crabb, Rob Cobden’s Riley Falcon Special, the ex-Ron Footitt AC/GN ‘Cognac’ Special of Tony Lees, last year’s victor Martin Spencer in the ex-Basil Davenport GN Spider II and the Hispano-engined Amilcar Special of Tom Walker, twice a winner already at VSCC Speed events this season. Amongst the local Competitors, Chris Williams again commands the mighty Napier Bentley and will be sure to entertain once more with his tyre-smoking antics.

The action starts with practice runs from 9.15am, followed by competitive timed runs in programme order with full commentary throughout the afternoon, finishing at approximately 5.30pm. Tickets are available on the day at £18.00 per person (accompanied Under 16s go free). 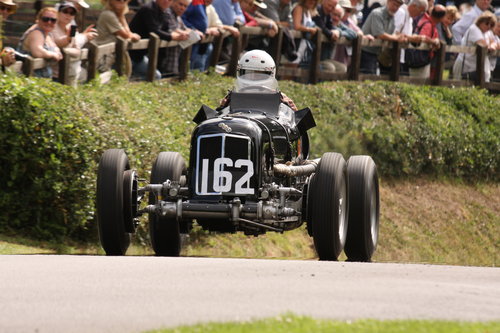