VSCC Members are eastbound for the VSCC Summer Rally this weekend

It’s the next instalment of the Club’s Rally Season this weekend, with the Summer Rally taking place tomorrow, Saturday 16 July based near Thetford, Norfolk.
Resurrecting the Club’s popular Eastern Rally of old, this year’s event sees the experienced local team of Piers Hart, Don Smith and Nic Portway take charge again after an absence of 20 years.

By kind permission of Lord Iveagh, the event will be based at Elveden Hall, just south of Thetford on the A11, with the day’s route taking Competitors through 90 miles of uncongested lanes in the idyllic setting of south Norfolk and the Waveney Valley in Suffolk.

In a slight break from tradition, the Rally will run straight through without a lunch break, allowing a slightly later start time of 10.30am. Following the morning’s Signing-On and Scrutineering process, participants will enjoy a welcome tea/coffee and breakfast bap (included in the day’s Entry Fee) before setting off on their navigation challenge. At the end of the day, participants will get the chance to discuss the event with fellow Competitors and enjoy a light meal in the restaurant adjoining the Hall.

Over 30 crews are scheduled to take part, with the day set to test the skills of Experts and Novices alike. Reigning Club Navigator Champion, Annabel Jones will be  determined to continue her successful start to the season following victory in the opening Measham in the Frazer Nash/BMW 319 Saloon of Bill Ainscough and 3rd Class award in Sir Clive Martin’s Frazer Nash Anzani. True to form, the ‘Nash Club Captain will passenger another ‘Chain-Gang’ machine this weekend, in local Club stalwart, Judy Portway’s 1928 Boulogne model. The pair will have plenty of competition amongst the Expert crews, from the likes of Paul Easter and David Odell in their Sunbeam 16.9, the Lea-Francis 12.9 Sports of Allan Lupton and David Kirkham and VSCC Chief Marshal, Ray Edge in his Bentley 3.5 Litre, navigated by Christopher Pearson.

James Portway completes the family’s heavy  involvement in the day, contesting the Semi-Expert Class with navigator Malcolm Stewart in the Vauxhall 30-98, alongside several regular crews, including Robert and Liz Renshaw’s Austin Tourer, whose daughter Claire will navigate for Club Marshal, Andy Fox in his Austin 7 Special. We also are delighted to welcome a dozen crews into the day’s Novice and Champagne Classes, including two Suffolk-based teams making their VSCC ‘debuts’ in Isabella and Stephen Knight’s Austin 7 Chummy, and the Humber 14/40 Tourer of John and Alex Scott.

We would like to wish the local Organising team, and all Competitors, Marshals and Officials taking part the best of luck for the Rally and hope they have another enjoyable day with the VSCC.

And don’t forget…
The Club’s annual Norfolk Tour is only a fortnight away, taking place on Saturday 30 July, starting and finishing at the Church in Garboldisham, between Diss and Thetford.

Cars will assemble in the Paddock next to the Church for ‘scrutineering’, with Breakfast served in the Church itself, when Signing-On will take place and the day’s route schedules will be issued.  The Church and Paddock are excellent and the route will take participants through some super country lanes in Norfolk (Veteran machinery will be very welcome).

We have already received a strong number of entries for this popular event but there are still plenty of places available. But hurry – entries close this coming Monday 18 July.

Download Supplementary Regulations and an Entry Form or enter online from the event page (CLICK HERE). Remember you will need to know the Buff Form number of the car you wish to enter and have a current payment card registered with the Club to use the online entry facility (however, note Buff Forms are not required to participate - simply print an Entry Form to complete and return by post/email/fax). 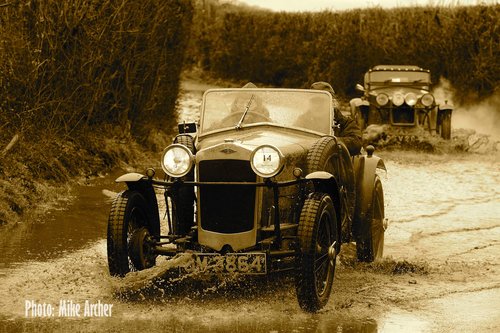