The Club’s Principal Associates, Bonhams enjoyed a successful weekend with a double-header of Sales at Chantilly and Beaulieu on Saturday 3 September.
BONHAMS SEE SALE SUCCESS AT CHANTILLY AS TIMELESS GERMAN CLASSICS GO UNDER THE HAMMER

In 1935 the 500K took pride of place on the Mercedes-Benz stand at the Berlin Motor Show, where it was promptly bought by Hans Friedrech Prym (1875-1965). Hans came from the industrial Prym dynasty, a family who for twelve generations had produced haberdashery, copper, and brass products, leading to Hans becoming known locally as the ‘zipper king’.

“The 500K was subsequently stolen, but now – after having returned to the family more than 80 years later, and carefully entrusted to Bonhams for auction – it has sold at our Chantilly Sale for an excellent €5,290,000,” said Philip Kantor, Bonhams European Head of Motoring.

“Bonhams return for only our second Sale in Chantilly. We’re delighted that the results have far exceeded that of last year, achieving more than €9 million at today’s sale.”

Bonhams Chantilly Sale takes place on the grounds of the Château de Chantilly, at the Chantilly Arts and Elegance fair, an event now in its 3rd year. The annual event attracts thousands of spectators, taking in the delights of the "Concours d'Elegance" competition for modern concept cars, and a superb "Concours d'Etat" for Classic cars from around the world. The "Art & Elegance" event also plays host to fine art exhibitions, fashion shows, live music and various lifestyle exhibits, all on the grounds of the magnificent château.

A British barn find Aston Martin DB4 – with no front wheels or seats – soared to £203,100 at Bonhams Beaulieu Sale this weekend, Saturday 3 September.

“This rare Series I DB4, the 78th of 149 built, was the perfect barn find Aston Martin for our Beaulieu Sale, and deserved to take top estimate,” said Tim Schofield, Bonhams UK Head of Motoring. “Over the years, it had fallen into disrepair but, once restored, we expect it to have been a worthwhile project.”

The Bonhams Sale at the 50th Annual International Autojumble saw more than 400 lots of motor cars, motorcycles, and rare automobilia go under the hammer, collectively achieving a grand total of £3.1million for the Sale, with 84% of lots sold.

Also selling well was the 1953 Mercedes-Benz 300 S Coupé. Originally owned by King Hussein of Jordan, it was the perfect car for statesmen, or indeed royalty, of the era. After an intense bidding battle, the 300 S finally sold to a European bidder for £292,700.

The Bonhams Motoring Department next head to Chichester for the Goodwood Revival Sale, taking place on Saturday 10 September.

For further information about this and other Sales, please CLICK HERE 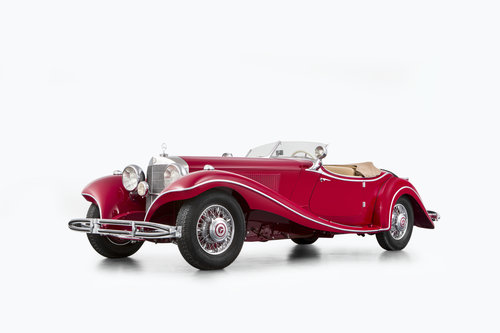