The Vintage Sports-Car Club is delighted to announce that the Midlands Air Ambulance Charity (MAAC) will become the Club’s nominated Official Charity for the next three years from 2017.
As regular supporters of the Club’s Prescott Speed Hill Climb events in August since 2011 – having raised over £6,100 during that time – the VSCC  will work closely with the MAAC across all the Club’s activities to help promote awareness of the charity and raise funds to support their life-saving work.

In addition to a continued presence at the Club’s premier Prescott Hill Climb weekend, the charity will also attend a number of other VSCC events which take place across the Midlands region, whilst collections will also be made throughout the season.

MAAC and VSCC will also host a joint fundraising event each year to further promote the association, with all of the proceeds going to the charity.

Midlands Air Ambulance is the charity responsible for funding and operating three air ambulances serving the communities of six counties: Gloucestershire, Herefordshire, Shropshire, Staffordshire, Worcestershire and the West Midlands. This constitutes the largest air ambulance operating region in the UK.

Club Secretary, Dave Salmon says: “I am delighted that the Committee chose such an important and worthwhile cause for the Club to support over the coming three years and we very much look forward to working with the MAAC team.”

Susie Godwin, Gloucestershire Fundraising Manager for the MAAC, says: “The partnership comes as extremely welcome news to the charity, as the continued investment means we can continue to fund our extremely important lifesaving service. I have very much enjoyed working with the VSCC team for the past three years, and look forward to a close collaboration in the future.”

Look out for regular updates from the Midlands Air Ambulance Charity in upcoming editions of the VSCC Newsletter or for more information visit www.midlandsairambulance.com.

What do we do? The charity now responds to an average of 2,000 missions each year (approximately six per day) making Midlands air ambulance one of the longest established and busiest air ambulance operators in the UK.

In 2016, Midlands Air Ambulance Charity celebrates its Air25, 25th anniversary. Launched in May 1991 as ‘Air5’, the charity was one of the first air ambulance services in the country and had just one helicopter flying out of a temporary airbase five days a week. Now, the charity has three helicopters serving a population of six million people, and has responded to over 46,000 missions to date.

As part of its commitment to patient care Midlands Air Ambulance has extended its flying times from 7am until 9pm throughout the year. The service aims to introduce night operations to reach those who need urgent medical treatment during the hours of darkness.

The cost: Each year it costs in excess of £7 million just to keep the three charity helicopters operational. The charity receives no funding from the government or National Lottery so relies entirely on the support and generosity of local people and businesses. 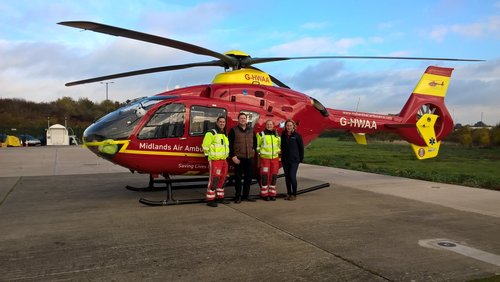