Bonhams will continue as the exclusive auction partner of the Vintage Sports-Car Club for a further five years.

As part of the agreement, the Club will be present at all Bonhams live European and UK sales, whilst Bonhams will continue to attend major VSCC events (health guidelines allowing) including its jewel, the Prescott Hill Climb, providing the ever-popular hospitality to members.

James Knight, Bonhams Group Motoring Chairman, commented: “The heritage of Bonhams and the VSCC partnership literally goes back decades and we are delighted to once again support arguably the UK’s most active and important Club for the collectors’ motor car movement.”

Bonhams’ association with the club dates back more than 25 years, and members of the Bonhams motoring team are regular and enthusiastic participants in the VSCC events.

Moreover, the house has a history of successfully selling VSCC-related motor cars in its sales, such as the 1929 Bugatti Type 40 Grand Sport Tourer, which had belonged to long-standing VSCC member, the late Tony Clark. This was sold at the Bonhams Golden Age of Motoring Sale in October 2020 for £310,500.

Another VSCC stalwart will feature in the forthcoming Bonhams Legends of the Road Sale: the ex-Hugh Hunter 1934 Frazer Nash TT Replica, estimate £200,000 – 250,000. This highly original car is well-known within VSCC circles, having been campaigned by its late owner in club races over many seasons.

James Knight added: Bonhams prides itself on being the clear market leader in the sale of VSCC eligible motor cars and we feel it important and appropriate to support the club. All of the team have participated in many events, whether motor circuit, rallies, trials or hill-climbs, and we look forward to meeting our friends and associates at some stage in 2021”.

“Many Bonhams staff are active and enthusiastic members of the Club and their participation at events encourages a personal connection. Our members have consistently reported the successful placement and purchase of cars with Bonhams and our new multi-year deal will allow this excellent relationship to continue to evolve.” 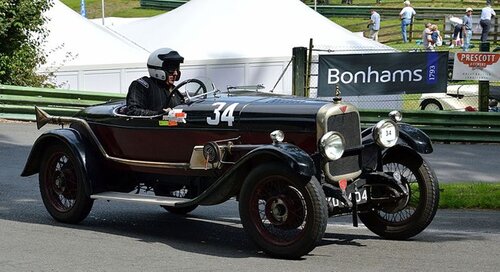